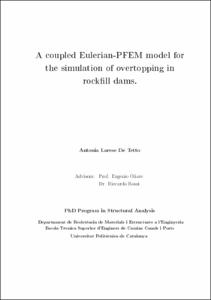 Chair / Department / Institute
Universitat Politècnica de Catalunya. Departament de Resistència de Materials i Estructures a l'Enginyeria
Document typeDoctoral thesis
PublisherUniversitat Politècnica de Catalunya
Rights accessOpen Access
Abstract
Rockfill dams are nowadays often preferred over concrete dams because of their economic advantages, their flexible design and thank to the great advance achieved in geosciences and geomechanics. Unfortunately their behavior in case of overtopping is still an open issue. In fact very little is known on this phenomenon that in most cases leads to the complete failure of the structure with catastrophic consequences in term of loss of lives and economic damage. The principal aim of the present thesis is the development of a computational method to simulate the overtopping and the beginning of failure of the downstream shoulder of a rockfill dam. The whole phenomenon is treated in a continuous framework. The fluid free surface problem outside and inside the rockfill slope is treated using a unique Eulerian fixed mesh formulation. A level set technique is employed to track the evolution of the free surface. The traditional Navier-Stokes equations are modified in order to automatically detect the presence of the porous media. The non-linear seepage is evaluated using a quadratic form of the resistance law for which the Ergun's coefficients have been chosen. The structural response of the solid skeleton is evaluated using a continuum viscous model. A non-Newtonian modified Bingham law is proposed for the simulation of the behaviour of a granular non-cohesive material. This approach has the possibility of considering a pressure sensitive resistance criteria. This is obtained inserting a Mohr-Coulomb failure criterion in the Bingham relation. Due to the large deformation of the mesh during the failure process, a Lagrangian framework is preferred to a fixed mesh one: the Particle Finite Element Method (PFEM) is therefore used. Its specific features make it appropriate to treat the rockfill material and its large deformations and shape changes. Finally a tool for mapping variables between non-matching meshes is developed to allow passing information between the fluid fixed and the dam moving meshes. All the numerical results are compared with experiments on prototype rockfill dams.
Description
Premi extraordinari doctorat curs 2011-2012, àmbit d’Enginyeria Civil
CitationLarese De Tetto, A. A coupled Eulerian-PFEM model for the simulation of overtopping in rockfill dams. Tesi doctoral, UPC, Departament de Resistència de Materials i Estructures a l'Enginyeria, 2012. Available at: <http://hdl.handle.net/2117/94752>
Award-winningAward-winning
URIhttp://hdl.handle.net/2117/94752
DLB. 10515-2013
Collections
Share: