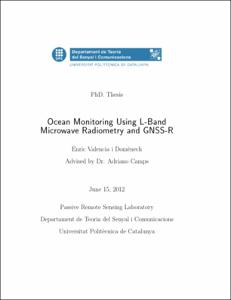 Chair / Department / Institute
Universitat Politècnica de Catalunya. Departament de Teoria del Senyal i Comunicacions
Document typeDoctoral thesis
PublisherUniversitat Politècnica de Catalunya
Rights accessOpen Access
Abstract
The knowledge of sea surface salinity (SSS) is a key issue to understand and monitor the Earth¿s water cycle. Accurate and systematic measurement of SSS was not possible until the ESA¿s Soil Moisture and Ocean Salinity (SMOS) mission was launched in 2009. The SMOS mission uses L-band microwave radiometry to infer SSS from measurements of the ocean¿s emis- sivity. However, the ocean surface emissivity is not only dependent on SSS, but also on sea surface temperature (SST), incidence angle, polarization, and sea surface roughness (i.e. sea-state). While the dependence on most of these parameters is well-known, and can be properly accounted for, the accurate estimation and correction of the sea surface roughness contribution remains a challenge. The Passive Advanced Unit (PAU) project was born in 2003 with the main objective of studying how to correct ocean L-band brightness temperature for the sea-state effect by using an emerging technology such as reflectome- try of opportunity GNSS signals (GNSS-R). GNSS-R is based on measuring the forward scattered GNSS signals so as to infer geophysical properties of the scattering surface. Particularly, the PAU project proposed to use direct observables from the reflected signal¿s Delay-Doppler Map (DDM) to parame- terize sea surface roughness, and link those observables to the brightness tem- perature variations induced by sea-state, without using scattering/emissivity models. In this line, prior work was performed by J.F. Marchan-Hernandez in his PhD. Thesis (UPC, Barcelona, 2009). In that work, a first version of the PAU GNSS-R receiver was developed, and first experimental results were obtained that supported the hypothesis that direct GNSS-R observables can be used to describe sea-state. This PhD. Thesis follows on that research, and steps into the use of GNSS- R observables for estimation of the sea-state contribution to the ocean L-band brightness temperature. The work presented here was undertaken between 2008 and 2012, and comprises contributions to three main fields: GNSS-R hardware development, experimental results, and theoretical studies. Firstly, the PAU GNSS-R instrument was re-designed and re-implemented for im- proved sensitivity and stability. Secondly, results from ground-based and airborne experiments were obtained, that prove the hypothesis that GNSS-R observables can be used to successfully correct L-band brightness tempera- ture for the sea-state effect, resulting in an improvement in the SSS retrieval accuracy. Finally, theoretical studies to foresee the performance of the PAU concept in a future spaceborne mission were conducted, along with the de- velopment of a new technique to obtain ocean surface scattering coefficient images from measured DDMs.
CitationValencia Domènech, E. Ocean monitoring using L-Band microwave radiometry and GNSS-R. Tesi doctoral, UPC, Departament de Teoria del Senyal i Comunicacions, 2012. Available at: <http://hdl.handle.net/2117/94703>
URIhttp://hdl.handle.net/2117/94703
DLB. 3467-2013
Collections
Share: