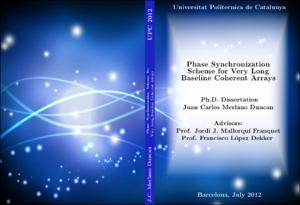 Except where otherwise noted, content on this work is licensed under a Creative Commons license : Attribution-NonCommercial-NoDerivs 3.0 Spain
Abstract
Precise phase synchronization of clock or local oscillator signals over distributed systems is a recurring requirement in the design of a wide range of systems, with applications in telecommunications and, for example, in phased arrays. Addressing this requirement is a challenging task when the distance between the subsystems is large in terms of the wavelength and, in particular, when this electrical distance is time-varying. Carrier phase synchronization is the most important challenge in order to implement distributed beamforming systems and to optimize their power efficiency. At the same time, phase synchronization is crucial for the implementation of distributed (bistatic / multistatic) radar systems. In the last decades different techniques for remote phase synchronization have been proposed. In 1968 Thompson discussed, compared and classified the available techniques for reducing propagation induced phase fluctuations in frequency distribution systems and presented the principle of round trip stabilization systems. These phase synchronization schemes are Phase Locked Loops (PLL) in which the phase offset is measured directly for the signal which travels along the two-way path, and a direct feedback action closes the loop. The most important challenge for the design of these systems is the implementation of a method for the discrimination between the waves that travel in opposite directions in the transmission channel. One approach that has been proposed in previous works to fulfill this requirement is the use of different frequencies. This Ph.D. thesis dissertation presents a new scheme for remote carrier phase synchronization in which a set of tones with similar frequencies are simultaneously used to synchronize two separated stations. In the proposed scheme, the bandwidth required by the set of tones traveling along the loop can be reduced wherewith the phase fluctuations generated by the dispersive effects of the medium can be drastically reduced. The proposed scheme was prototyped and tested in the laboratory, with satisfactory results, and a possible application of the phase synchronization prototype has been evaluated. In order to show the excellent behavior of the phase synchronization prototype a simple distance measurement experiment has been carried out. In that experiment the variations of a distance are obtained from the variations of a measured phase using the synchronization prototype.
CitationMerlano Duncan, J.C. Phase synchronization scheme for very long baseline coherent arrays. Tesi doctoral, UPC, Departament de Teoria del Senyal i Comunicacions, 2012. Available at: <http://hdl.handle.net/2117/94675>
URIhttp://hdl.handle.net/2117/94675
DLB. 34473-2012
Collections
Share: