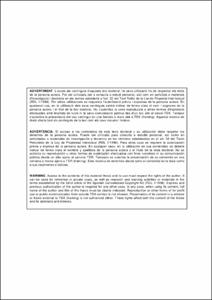 Chair / Department / Institute
Universitat Politècnica de Catalunya. Departament de Projectes Arquitectònics
Document typeDoctoral thesis
PublisherUniversitat Politècnica de Catalunya
Rights accessOpen Access
Abstract
The thesis focuses on the columns in Mies, as architectural element through which we can explain all his work. The development of a chronological table that organizes the work of Mies according to the shape of the column reveals us the existence of three distinct periods, each of which corresponds to the development of a different column. FIRST PERIOD: This period corresponds to the study of the star column of small riveting profiles, where a parallelism between the work of Mies, the Alfred Grenander's, architect of Siemens, and Peter Behren', architect of AEG, is set up. Mies builds the same construction system of small riveting profiles published in different manuals of that time, adding small construction variations to achieve his architectural concerns. For example, he proposes an alternative to the usual gusset plates to solve the joints between the column and the beam, reducing them to a point therefore getting the absolutely flat roof of the German Pavilion. SECOND PERIOD: This period corresponds to the study of the grey column, which Mies uses at the United States, where he met the architecture of great welded steel  profiles used by Albert Kahn, the Henry Ford's architect. The application of the assembly line in manufacturing automobiles requires Kahn and Ford to innovate in the structures of large size and to spread the same structural order in all the buildings of the same industrial complex. The first buildings of Mies at the IIT are almost identical to those of Albert Kahn, with small variations, starting  a process that will end with the Crown Hall. THIRD PERIOD: This period corresponds to the study of the star column built with double-T profiles and the incorporation of the waffle slab structure in the work of Mies, which he develops from its relationship with Konrad Wachsmann, professor at IIT and architect of the US Air Force. Wachsmann develops three-dimensional structures in order to build large hangars for aircrafts, which can be assembled and disassembled by unskilled people in a very short time. Moreover, they don't generate any waste material. Mies will simplify constructively this structure, finally reaching the National Gallery. CONCLUSIONS. THE EFFECTS OF SCALE IN ARCHITECTURE: An overview of the technological context allows us to explore the link between Mies and those architects who lead the construction with steel structure in different industries and who are linked to the research and technological development institutions as relevant as the Werkbund, the Bauhaus and the IIT, in which Mies has taken a leading role in places of highest responsibility. The reconstruction of this technological context throughout the three periods allows us to draw a path of the development of the steel structures, which increasingly takes on new challenges of scale. Furthermore, shows us how Mies incorporates these advances in their work, and applies them to all scales in all three pillars. ARCHITECTURAL MANIFESTO: The comparative study of transitional projects reveals how Mies proposes some collage in every one of the three periods, as an architectural manifesto, which links the concept of neo-plastic space with every new structure. This is an invariant aspect in his work from the concrete house project in 1923 and the brick house project in 1924. TOWARDS THE CLARIFICATION OF THE STRUCTURE: The comparative study of the column allows us to realize its capacity to express the structure. The step from a column to another is part of a process in the work of Mies to the clarification of the structure. Thus it is becoming cleaner and he can leave it more and more visible. It is a constructive refinement process, and it is part of the same work line initiated by Viollet-le-Duc on the constructive shape that best expresses the steel structure, the one which responds to the material logic and the constrution processes.
Description
Premi extraordinari doctorat curs 2011-2012, àmbit d’Arquitectura, Urbanisme i Edificació
CitationJiménez Gómez, E.M. El pilar en Mies van der Rohe: el lèxic de l'acer. Tesi doctoral, UPC, Departament de Projectes Arquitectònics, 2012. Available at: <http://hdl.handle.net/2117/94647>
Award-winningAward-winning
URIhttp://hdl.handle.net/2117/94647
DLB. 31715-2012
Collections
Share: