Multi-scale biomechanical study of transport phenomena in the intervertebral disc 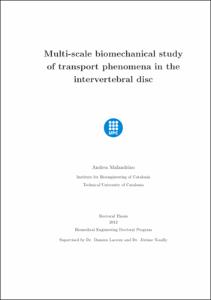 Except where otherwise noted, content on this work is licensed under a Creative Commons license : Attribution-NonCommercial 3.0 Spain
Abstract
Intervertebral disc (IVD) degeneration is primarily involved in back pain, a morbidity that strongly affects the quality of life of individuals nowadays. Lumbar IVDs undergo stressful mechanical loads while being the largest avascular tissues in our body: Mechanical principles alone cannot unravel the intricate phenomena that occur at the cellular scale which are fundamental for the IVD regeneration. The present work aimed at coupling biomechanical and relevant molecular transport processes for disc cells to provide a mechanobiological finite element framework for a deeper understanding of degenerative processes and the planning of regenerative strategies. Given the importance of fluid flow within the IVD, the influence of poroelastic parameters such as permeabilities and solid-phase stiffness of the IVD subtissues was explored. A continuum porohyperelastic material model was then implemented. The angles of collagen fibers embedded in the annulus fibrosus (AF) were calibrated. The osmotic pressure of the central nucleus pulposus (NP) was also taken into account. In a parallel study of the human vertebral bone, microporomechanics was used together with experimental ultrasonic tests to characterize the stiffness of the solid matrix, and to provide estimates of poroelastic coefficients. Fluid dynamics analyses and microtomographic images were combined to understand the fluid exchanges at the bone-IVD interface. The porohyperelastic model of a lumbar IVD with poroelastic vertebral layers was coupled with a IVD transport model of three solutes - oxygen, lactate and glucose - interrelated to reproduce the glycolytic IVD metabolism. With such coupling it was possible to study the effect of deformations, fluid contents, solid-phase stiffness, permeabilities, pH, cell densities of IVD subtissues and NP osmotic pressure on the solute transport. Moreover, cell death governed by glucose deprivation and lactate accumulation was included to explore the mechanical effect on cell viability. Results showed that the stiffness of the AF had the most remarkable role on the poroelastic behavior of the IVD. The permeability of the thin cartilage endplate and the NP stiffness were also relevant. The porohyperelastic model was shown to reproduce the local AF mechanics, provided the fiber angles were calibrated regionally. Such back-calculation led to absolute values of fibers angles and to a global IVD poromechanical behavior in agreement with experiments in literature. The inclusion of osmotic pressure in the NP also led to stress values under confined compression comparable to those measured in healthy and degenerated NP specimens. For the solid bone matrix, axial and transverse stiffness coefficients found experimentally in the present work agreed with universal mass density-elasticity relationships, and combined with continuum microporomechanics provided poroelastic coefficients for undrained and drained cases. The effective permeability of the vertebral bony endplate calculated with fluid dynamics was highly correlated with the porosity measured in microtomographic images. The coupling of transport and porohyperelastic models revealed a mechanical effect acting under large volume changes and high compliance, favored by healthy rather than degenerated IVD properties. Such effect was attributed to strain-dependent diffusivities and diffusion distances and was shown to be beneficial for IVD cells due to the load-dependent increases of glucose levels. Cell density, NP osmotic pressure and porosity were the most important parameters affecting the coupled mechano-transport of metabolites. This novel study highlights the restoration of both cellular and mechanical factors and has a great potential impact for novel designs of treatments focused on tissue regeneration. It also provides methodological features that could be implemented in clinical image-based tools and improve the multiscale understanding of the human spine mechanobiology.
Description
Premi extraordinari doctorat curs 2011-2012, àmbit d’Enginyeria Industrial
CitationMalandrino, A. Multi-scale biomechanical study of transport phenomena in the intervertebral disc. Tesi doctoral, UPC, Departament d'Enginyeria de Sistemes, Automàtica i Informàtica Industrial, 2012. Available at: <http://hdl.handle.net/2117/94640>
Award-winningAward-winning
URIhttp://hdl.handle.net/2117/94640
DLB. 29220-2012
Collections
Share: