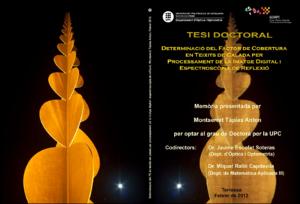 Except where otherwise noted, content on this work is licensed under a Creative Commons license : Attribution-NonCommercial-NoDerivs 3.0 Spain
Abstract
In this thesis we applied, in a complementary way, techniques of digital image processing and reflectance spectroscopy to perform cover factor (CF) measurements in monochrome openwork fabrics. To evaluate the results provided by both techniques, we used the average CF obtained by a group of 18 expert observers as a reference. IMAGE PROCESSING PART: We developed a new, automatic and objective method for measuring both total and partial CF, and the width of the threads, from the digital image of the fabric. Two algorithms were developed for total and partial CF determinations. The image processing technique used to measure the total CF was the segmentation of the holes from the fabric threads. Conventional methods of segmentation did not lead to similar results than those of the total visual CF. Therefore, we designed a new algorithm (MSSQ) to measure the total CF of fabrics, independently of their degree of coverage. All the CF obtained in 81 typified textile samples were correlated with the CF obtained visually. The best fit to the Stevens' psychophysical law was achieved with the method MSSQ. These results were also consistent with the construction parameters of fabrics. The determination of partial CF in the warp and weft directions was performed by filtering in the Fourier space the warp and weft threads of the sample. For the design of these filters we applied the Radon transform to the power spectrum of the image of the fabric, in order to determine the direction of the warp and weft harmonics. The values of partial CF were consistent with the parameters that characterize the threads and were logical, expected and confirmed the robustness of the method. The values of the diameters of the threads were also consistent with the parameters of the yarn manufacturing and with the manual measurement performed on the image of the same fabric. This method is easily implementable in a laboratory of textile analysis. REFLECTANCE PART: We modelled the reflectance of a flat layer of fabric arranged on a support of known reflectance using the Kubelka-Munk theory. For this purpose we assumed that the optical behaviour of a layer of fabric could be determined by the superposition of two ideal elements: a neutral density filter with no thickness and with different values of transmittance depending on both the direction of the beam (input or output) and whether the beam passes through the covered part of the yarns or through the holes, plus a uniform and homogeneous layer of a material that meets the assumptions of the theory of Kubelka-Munk. The final model contained CF as a parameter. For a set of different samples of fabrics, the integrated spectral reflectance of a stack of increasing number of layers was experimentally measured with a spectroradiometer, up to stabilize the measure. The experimental reflectances were introduced in the generalized model to calculate the values of the parameters involved, particularly the CF. We solved the resulting system of 101 ¿ (m - 1) equations using the least squares method, where m is the total number of stacked layers of fabric, with 103 unknowns. This yielded a couple of estimates of CF. We established correlations between the measured CF (obtained as the solution of these equations) and the visual CF and analyzed the effect of perturbations in the reflectance measurements to explain the discrepancies between these two estimates of CF. Even if we observed problems of precision in one of the estimates and inaccuracy in the other, arising from an unknown parameter in the model, the intervention of the CF in the described model has been proven.
CitationTapias Anton, M. Determinació del factor de cobertura en teixits de calada per processament de la imatge digital i espectroscòpia de reflexió. Tesi doctoral, UPC, Departament d'Òptica i Optometria, 2012. Available at: <http://hdl.handle.net/2117/94619>
URIhttp://hdl.handle.net/2117/94619
DLB. 24412-2012
Collections
Share: