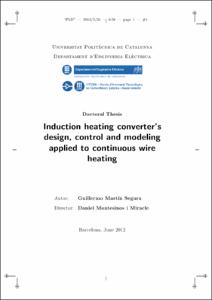 Chair / Department / Institute
Universitat Politècnica de Catalunya. Departament d'Enginyeria Elèctrica
Document typeDoctoral thesis
PublisherUniversitat Politècnica de Catalunya
Rights accessOpen Access
Abstract
Induction heating is a heating method for electrically conductive materials that takes advantage of the heat generated by the Eddy currents originated by means of a varying magnetic field. Since Michael Faraday discovered electromagnetic induction in 1831, this phenomena has been widely studied in many applications like transformers, motors or generators' design. At the turn of the 20th century, induction started to be studied as a heating method, leading to the construction of the first industrial induction melting equipment by the Electric Furnace Company in 1927. At first, the varying magnetic fields were obtained with spark-gap generators, vacuum-tube generators and low frequency motor-generator sets. With the emergence of reliable semiconductors in the late 1960's, motor-generators were replaced by solid-state converters for low frequency applications. With regard to the characterization of the inductor-workpiece system, the first models used to understand the load's behavior were based on analytical methods. These methods were useful to analyze the overall behavior of the load, but they were not accurate enough for a precise analysis and were limited to simple geometries. With the emergence of computers, numerical methods experienced a tremendous growth in the 1990's and started to be applied in the induction heating field. Nowadays, the development of commercial softwares that allow this type of analysis have started to make the use of numerical methods popular among research centers and enterprises. This type of softwares allow a great variety of complex analysis with high precision, consequently diminishing the trial and error process. The research realized in last decades, the increase in the utilization of numerical modeling and the appearance and improvement of semiconductor devices, with their corresponding cost reduction, have caused the spread of induction heating in many fields. Induction heating equipments can be found in many applications, since domestic cookers to high-power aluminum melting furnaces or automotive sealing equipments, and are becoming more and more popular thanks to their easy control, quick heating and the energy savings obtained. The present thesis focuses on the application of induction heating to wire heating. The wire heating is a continuous heating method in which the wire is continuously feeding the heating inductor. This heating method allows high production rates with reduced space requirements and is usually found in medium to high power industrial processes working 24 hours per day. The first chapters of this study introduce the induction heating phenomena, its modeling and the converters and tanks used. Afterwards, a multichannel converter for high-power and high-frequency applications is designed and implemented with the aim of providing modularity to the converter and reduce the designing time, the production cost and its maintenance. Moreover, this type of structure provides reliability to the system and enables low repairing times, which is an extremely interesting feature for 24 hours processes. Additionally, a software phase-locked loop for induction heating applications is designed and implemented to prove its flexibility and reliability. This type of control allows the use of the same hardware for different applications, which is attractive for the case of industrial applications. This phase-locked loop is afterwards used to design and implement a load-adaptative control that varies the references to have soft-switching according to load's variation, improving converter's performance. Finally, the modeling of a continuous induction wire hardening system is realized, solving the difficulty of considering the mutual influence between the thermal, electromagnetic and electric parameters. In this thesis, a continuous process is modeled and tested using numerical methods and considering converter's operation and influence in the process.
CitationMartín Segura, G. Induction heating converter's design, control and modeling applied to continuous wire heating. Tesi doctoral, UPC, Departament d'Enginyeria Elèctrica, 2012. Available at: <http://hdl.handle.net/2117/94610>
URIhttp://hdl.handle.net/2117/94610
DLB. 24405-2012
Collections
Share: