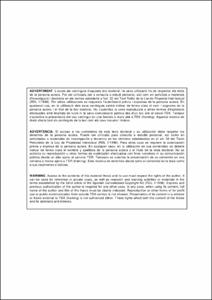 Show full item record
Yudistira, Didit
Tutor / director / evaluatorPruneri, Valerio; Janner, Davide
Chair / Department / Institute
Universitat Politècnica de Catalunya. Institut de Ciències Fotòniques
Document typeDoctoral thesis
PublisherUniversitat Politècnica de Catalunya
Rights accessOpen Access
Abstract
In this thesis we have investigated and proposed acoustic superLattices (ASLs) made of periodically poled ZX-cut lithium niobate (PPLN) associated ith coplanar electrodes as an effective alternative for surface acoustic wave (SAW) generation. In order to examine the acoustic transduction in the SL transducer we have developed and employed two modeling techniques. i.e . scalar approximation and finite element method (FEM) analysis (2-D nd 3-D modeling) implemented in COMSOL MULTIPHYSICS. Both techniques give similar results with respect to the characteristics of generated SAW modes. The calculated results obtained with the 3-D FEM simulation confirmed the Rayleigh nature of the generated SAW, showing that the excited SAW in the ASL is similar to that of the standard interdigitated transducer (IDT). From the propagation analysis in 2-D FEM simulation. we obtained that in addition to the SAW, the ASL transducer excites longitudinal bulk acoustic wave (L-BAW). Moreover. the 2-D model showed that the SAW excited by the ASL transducer does not propagate but it is rather confined within the transducer. Several ASL transducers, with different lattice periods, have been realized and characterized, also to validate the modeling and design tools . One and two-portelectrical measurements have been performed to evaluate the electro-acoustic response. In addition laser interferome try has been carried out o determine the out-of-plane component of the SAW displacement. With respect to the standard IDT configuration using the same crystal orientation, he efficiency of the SAW generation in the proposed designs is similar, while, for the same grating period, the resonance frequency that can be achieved is two times larger. In addition to the SAW, unlike its lOT counterparts, the ASL transducer can excite the L-BAW, as it had been predicted by the modeling. The two-port measurements have shown that the SAW signal collected at the receiver is small, indicating that the SAW energy remains essentially confined within the transmitter. This experimental result too is in agreement with the aforementioned theoretical predictions. After the experimental validation of the modeling, we designed and fabricated acousto-optic (AO) filters incorporating the ASL transducer. ASL struc tures with 20 tm period and coplanar electrodes have been realized along with 6 m wide Ti-LiNb03 optical channel waveguide. In that way monolithic and integrated (waveguide) SAW based AO filters and L-BAW based bulk AO filters have been demonstrated. As for integrated SAW based 0 filter, a 3-dB optical bandwidth of 2.5 nm, center wavelength of 1456 nm, and -20 dB distance of 14.49 nm are obtained at the SAW resonance frequency of 189.94 MHz. Such filter requires 1 W RF power to achieve nearly complete polarization conversion. As for the bulk AO filter. a center Wavelength of 1472.5 nm is measured at the L-BAW resonance frequency of 328 MHz. In the bulk AO filter. full conversion cannot be reached even at RF power up to 2 W. Comparing to the integrated (waveguide) filter. the efficiency of the bulk filter is significantly lower. The AO filter's central wavelength can be tuned by changing the RF power. We investigated several designs to improve the AO filter efficiency. By optimizing the ASL transducer (coplanar electrodes with electrode width of 70 urn and gap of 20 t m), nearly complete optical switching at very low electrical powers (50mW) has been obtained, this corresponding to an improvement factor of 20 compared to previous results. An appropriate mass-loading, placed on the surface and in between the electrodes of a coplanar LiNb03 ASL, has allowed achieving strong lateral confinement of the acoustic field, thus leading to a significant improvement of the AO filter performance.
CitationYudistira, D. Micro-structured ferroelectric superlattice for efficient acousto-optic devices. Tesi doctoral, UPC, Institut de Ciències Fotòniques, 2012. Available at: <http://hdl.handle.net/2117/94593>
URIhttp://hdl.handle.net/2117/94593
DLB. 20057-2012
Collections
Share: