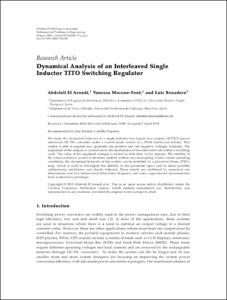 Document typeArticle
Rights accessOpen Access
All rights reserved. This work is protected by the corresponding intellectual and industrial property rights. Without prejudice to any existing legal exemptions, reproduction, distribution, public communication or transformation of this work are prohibited without permission of the copyright holder
Abstract
We study the dynamical behavior of a single inductor two inputs two outputs (SITITO) power electronics DC-DC converter under a current mode control in a PWM interleaved scheme. This system is able to regulate two, generally one positive and one negative, voltages (outputs). The regulation of the outputs is carried out by the modulation of two time intervals within a switching cycle. The value of the regulated voltages is related to both duty cycles (inputs). The stability of the whole nonlinear system is therefore studied without any decoupling. Under certain operating conditions, the dynamical behavior of the system can be modeled by a piecewise linear (PWL)map, which is used to investigate the stability in the parameter space and to detect possible subharmonic oscillations and chaotic behavior. These results are confirmed by numerical one dimensional and two-dimensional bifurcation diagrams and some experimental measurements from a laboratory prototype.
CitationEl Aroudi, A.; Moreno-Font, V.; Benadero, L. Dynamical analysis of an interleaved single inductor TITO switching regulator. "Mathematical problems in engineering", Juny 2009, vol. 2009, núm. 946245, p. 1-19.
URIhttp://hdl.handle.net/2117/9454
ISSN1024-123X
Publisher versionhttp://www.hindawi.com/journals/mpe/2009/946245.html
Collections
Share: