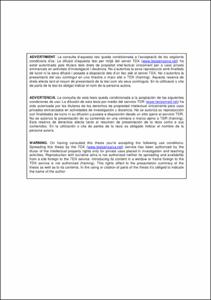 Chair / Department / Institute
Universitat Politècnica de Catalunya. Departament d'Enginyeria Química
Document typeDoctoral thesis
PublisherUniversitat Politècnica de Catalunya
Rights accessOpen Access
All rights reserved. This work is protected by the corresponding intellectual and industrial property rights. Without prejudice to any existing legal exemptions, reproduction, distribution, public communication or transformation of this work are prohibited without permission of the copyright holder
Abstract
Polymer clay nanocomposites of polyamides and biodegradable polymers with three kinds of organomodified clays were prepared by different techniques (in situ polymerization, solution casting, and melt mixing). The polymers used in this research were nylons 56, 65 and 47 and the biodegradable polymers: poly (glycolic acid-alt-6-hydrohexanoic acid) and poly(glycolic acid-alt-6-aminohexanoic acid). The development of biodegradable nanocomposites with improved or modified material properties is an interesting topic since these new materials are expected to replace already existing biodegradable and non-biodegradable commodity plastics in some specific applications.This project aims to study the influence of clay particles incorporated in a polymer matrix on the crystallization processes, the study of the in situ polymerization kinetics of mixtures of clays and monomers of biodegradable polymers, as well as the influence of nanoparticles on the thermal behavior and morphologic parameters. Even-odd, and odd-even polyamides were chosen to study the Brill transition and to prepare nanocomposites with organomodified clays. These polyamides have a peculiar structure where hydrogen bonds are established along two different directions. X-ray diffraction as well as SAXS-WAXD synchrotron experiments were employed to study the structural changes induced by temperature, during heating and cooling. Different organomodified clays were used to prepare nanocomposites, which final structure was found to be dependent on the preparation method. Nanocomposites derived from biodegradable polymers were characterized by means of X-ray diffraction and transmission electron microscopy. Morphological studies showed that the extent of clay dispersion depended on the clay type and on the preparation technique. Hence, exfoliated and intercalated nanocomposites could be obtained. The final nanocomposite structure was found to have a great influence on both cold and hot crystallization processes. Hence, the crystallization rate increased and decreased with respect to the neat polymer when intercalated and exfoliated structures were respectively obtained. The kinetics of the polymerization process was also studied by means of FTIR and SAXS-WAXD. The results indicate that the presence of the organomodified clay had a remarkable effect on the kinetic parameters.
Description
Premi extraordinari doctorat curs 2011-2012, àmbit d’Enginyeria Industrial
CitationMorales Gámez, L.T. Study of nanocomposites prepared from polyamides and biodegradable polyesters and poly(ester amide)s. Tesi doctoral, UPC, Departament d'Enginyeria Química, 2012. Available at: <http://hdl.handle.net/2117/94512>
Award-winningAward-winning
URIhttp://hdl.handle.net/2117/94512
DLB. 6088-2012
Collections
Share: