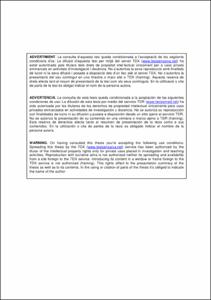 Chair / Department / Institute
Universitat Politècnica de Catalunya. Departament de Teoria del Senyal i Comunicacions
Document typeDoctoral thesis
PublisherUniversitat Politècnica de Catalunya
Rights accessOpen Access
Abstract
The European Space Agency's Soil Moisture and Ocean Salinity (SMOS) satellite was launched on November, 2, 2009 from the Russian cosmodrome of Plesetsk. Its objective is to globally and regularly collect measurements of soil moistre and Sea Surface Salinity (SSS). To do that, a pioneering instru- ment has been developed: the Microwave Imaging Radiometer by Aperture Synthesis (MIRAS), the rst space-borne, 2-D interferometric radiometer ever built; it operates at L-band, with a central frequency of 1.4135 GHz, and consists of 69 antennas arranged in a Y shape array. MIRAS' output are brightness temperature maps, from which SSS can be derived through an iterative algorithm, and using auxiliary information. For each overpass of the satellite an SSS map is produced, with an estimated accuracy of 1 psu (rmse). According to the Global Ocean Data Assimilation Experiment (GODAE) the mission requirement is instead speci ed as 0.1 psu after av- eraging in a 10-day and 2 2 spatio-temporal boxes. In previuos works ((Sabia et al., 2010), or more extensively in Dr. Sabia's Ph.D. thesis (Sabia, 2008)) the main error sources in retrieving SSS from SMOS measurements were determined as: 1. Scene-dependent bias in the simulated measurements, 2. L-band forward modeling de nition, 3. Radiometric sensitivity and accuracy, 4. Constraints in the cost function, and 5. Spatio-temporal averaging. This Ph.D. thesis, is an attempt of reducing part of the aforementioned errors (the relative to the one-overpass SSS (1 - 4)) by a more sophisticated data processing. Firstly, quasi-realistic brightness temperatures have been simulated using the SMOS End-to-end Performance Simulator (SEPS) in its full mode and an ocean model, as provider for geophysical parameters. Using this data set the External Brightness Temperature Calibration technique has been tested to mitigate the scene-dependent bias, while the error introduced by inaccuracies in the L-band forward models has been accounted for by the application of the External Sea Surface Salinity Calibration. Apart from simulated brightness temperatures, both External Brightness Temperature Calibration and External Sea Surface Salinity Calibration have been tested using real synthetic-aperture brightness temperatures, collected by the Helsinki University of Technology HUT-2D radiometer during the SMOS Calibration and Validation Rehearsal Campaign in August 2007 and ten days of data acquired by the SMOS satellite between July 10 and 19, 2010. Finally, a study of the cost function used to derive SSS has been performed: the correlation between measurement mis ts has been estimated and the e ect of including it in the processing have been assessed. As an outcome of a 3-month internship at the Laboratoire LOCEAN in Paris, France, a theoretical review of the e ect of the rain on the very top SSS vertical pro le has been carried out and is presented as Appendix.
Description
Premi extraordinari doctorat curs 2010-2011, àmbit d’Enginyeria de les TIC
CitationTalone, M. Contributrion to the improvement of the soil moisture and ocean salinity (SMOS) sea surface salinity retrieval algorithm. Tesi doctoral, UPC, Departament de Teoria del Senyal i Comunicacions, 2010. ISBN 9788469514788. Available at: <http://hdl.handle.net/2117/94481>
Award-winningAward-winning
URIhttp://hdl.handle.net/2117/94481
DLB. 39399-2011
ISBN9788469514788
Collections
Share: