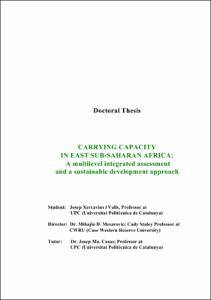 In the context of the global human/earth issues (population, poverty, imbalances, environment problematic, global warming, water scarcity, economical globalization, etc.) with the others the Carrying Capacity issue is emerging. It is a "driver" which is not always simply related with sustainable development concepts. It is therefore enormously important to give adequate answers to the majority of the global dilemmas.

The definition of carrying capacity is not easy because it is controversial. So the first chapter of this study is to adopt a clearer position in reference to the meaning, the borders, the key aspects, etc., of our approach to this issue. Basically, our approach is, first, from the sustainable development point of view and, second, a local approach in a global view. Finally and concretely, we indicate what aspects, in which place, how do we study carrying capacity? The answer to these questions will be: the agricultural (land and water) reality in a very specific region of East Sub Saharan Africa.

So the next step of the work is to specify and delimit our chosen region and, obviously, to study it in detail. Chapter 2, and some parts of Chapter 8, are the results of this.

The kind of methodological approach to global human/earth issues is, clearly, the most characteristic point of our work. We follow a scientific approach developed by Dr. Mihajlo Mesarovic over forty years ago in the mathematical systems analysis field and "finished" in multilevel integrated assessment with reasoning support tools for policy analysis. We study in depth and analyze this methodology in Chapter 3.

From a first or high level point of view of a hierarchy of models in our methodology, we study the population and, for the moment in this level, the carrying capacity reality, which is a dynamic system in reality, of our case study region. We have created the corresponding model and then, we have used a reference study from FAO/IIASA/UN [B.3.7] that, according to our bibliography searches and the role that it is continuing to play in the international studies of this issue in developing countries, is a "key reference". We find all of this in chapters 5 (population) and 6 (carrying capacity). In fact one of the goals of this work as a whole is to involve, extend, and indeed test the results of the mentioned report using our methodology.

Always from the hierarchical point of view we affront, finally, the second level representation of our issue. It is the most creative part of our study. We decide, after a deep analysis of the background, that we can succeed in developing a new agricultural model involving land and water aspects.

Because water is another controversial driving factor of the global human/earth issues, we focus on it in chapter 7. We add some personal special approach according to our methodology and "philosophy".

Chapter 8 is the highlight and plays, at the same time, an integrated role of the whole study and, in particular, the second level approach from the point of view of the hierarchy of the models. It allows us to make many final conclusions in several directions. About the methodology itself: extremely powerful with the interrelated combination of the different models levels approach. About the key report cited: only needs to be revised in its high input/output forecasting. The success and new possibilities in order to study the carrying capacity issue, for future policy "vision" analysis, that we now have from the point of view of agricultural reality. Finally, a dramatic foresight and call to the international decision- makers about the situation in our Case Study Region (essentially, the more stressful sub-region of East Sub-Saharan Africa).

Assessment of carrying capacity is essential in the search for the condition of sustainable development. While sustainability has a global dimension focus, for carrying capacity assessment has to be on geographic areas within which the needs of population have to be satisfied consistent with the physiologically determined time constraints. Specifically, food had to be secured for the population on location and in time where the need exists. Large geographic areas cannot be sustained by food imported from distant locations on the globe. In short, some degree of food self-sufficiency is a prerequisite for sustainability. The research reported here started by identifying eastern Sub-Sahara Africa as the most vulnerable geographic region in the sense of carrying capacity.

The objective of the research was to approach the question of carrying capacity in a practical integrated manner ("problematique"); i.e., in the context of real constraints imposed by environmental life support resources, rather than to "reduce" the problem to the considerations of the theoretical extreme capacity that have no chance of being achieved in reality.

On the first level, a model is developed focusing on the most dominant relationship between population evolution and carrying capacity as a dynamic, time varying system. Broad based data available in international sources are used. Results of FAO research, which is recognized as being the most authoritative, is used to parameterize the model for all countries in the region as well as for the region itself. The concept of an index of carrying capacity potential is developed to assess the results of the simulation using three levels of technology inputs of agricultural production, identified by the FAO.

A second level model is developed in which actual physical constraints -land, yields, water and irrigation- are explicitly taken into account. Assessment of carrying capacity supported by actual data is then conducted using the same carrying capacity potential index as the first level. Consistency of the results on the two levels has been demonstrated. This conclusion -not to be expected a priori- has justified the application of the multilevel, from the hierarchical of the models point of view, approach. As such it presents a contribution to the methodology beyond the carrying capacity problem per se.

So, in summary, the main contributions of the thesis are threefold:

a) Contribution to the complex systems analysis methodology based on the multilevel modeling hierarchy approach, that uses the notions of a dominant relationship rather than more detailed approximation, in order to construct models on different levels of the modeling hierarchy. Consistency of the results on two levels-not expected a priori-open the ways for application of the approach to other problem domains (global warming, water scarcity, etc.).