Contribution to the improvement of integral equation methods for penetrable scatterers 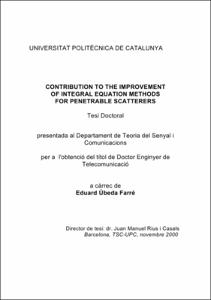