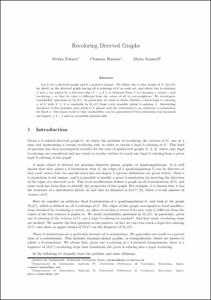 Let G be a directed graph and k a positive integer. We define the k-color graph of G (Dk(G) for short) as the directed graph having all k-colorings of G as node set, and where two k-colorings and ' are joined by a directed edge ! ' if ' is obtained from by choosing a vertex v and recoloring v so that its color is different from the colors of all its out-neighbors. We investigate reachability questions in Dk(G). In particular we want to know whether a fixed legal k′-coloring of G with k′ k is reachable in Dk(G) from every possible initial k-coloring . Interesting instances of this problem arise when G is planar and the orientation is an arbitrary -orientation for fixed . Our main result is that reachability can be guaranteed if the orientation has maximal out-degree k − 1 and an accessible pseudo-sink.
CitationFelsner, S.; Huemer, C.; Saumell, M. Recoloring directed graphs. A: Encuentros de Geometría Computacional. "XIII Encuentros de Geometría Computacional". Zaragoza: Prensas Universitarias de Zaragoza, 2009, p. 91-97.
URIhttp://hdl.handle.net/2117/9409
ISBN978-84-92774-11-1