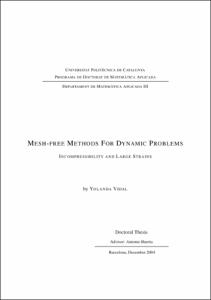 This thesis makes two noteworthy contributions in the are of mesh-free methods: a Pseudo-Divergence-Free (PDF) Element Free Galerkin (EFG) method which alleviates the volumetric locking and a Stabilized Updated Lagrangian formulation which allows to solve fast-transient dynamic problems involving large distortions. The thesis is organized in the following way.
First of all, this thesis dedicates one chapter to the state of the art of mesh-free methods. The main reason is because there are many mesh-free methods that can be found in the literature which can be based on different ideas and with different properties. There is a real need of classifying, ordering and comparing these methods: in fact, the same or almost the same method can be found with different names in the literature.
Secondly, a novel improved formulation of the (EFG) method is proposed in order to alleviate volumetric locking. It is based on a pseudo-divergence-free interpolation. Using the concept of diffuse derivatives an a convergence theorem of these derivatives to the ones of the exact solution, the new approximation proposed is obtained imposing a zero diffuse divergence. In this way is guaranteed that the method verifies asymptotically the incompressibility condition and in addition the imposition can be done a priori. This means that the main difference between standard EFG and the improved method is how is chosen the interpolation basis. Modal analysis and numerical results for two classical benchmark tests in solids corroborate that, as expected, diffuse derivatives converge to the derivatives of the exact solution when the discretization is refined (for a fixed dilation parameter) and, of course, that diffuse divergence converges to the exact divergence with the expected theoretical rate. For standard EFG the typical convergence rate is degrade as the incompressible limit is approached but with the improved method good results are obtained even for a nearly incompressible case and a moderately fine discretization. The improved method has also been used to solve the Stokes equations. In this case the LBB condition is not explicitly satisfied because the pseudo-divergence-free approximation is employed. Reasonable results are obtained in spite of the equal order interpolation for velocity and pressure.
Finally, several techniques have been developed in the past to solve the well known tensile instability in the SPH (Smooth Particle Hydrodynamics) mesh-free method. It has been proved that a Lagrangian formulation removes completely the instability (but zero energy modes exist). In fact, Lagrangian SPH works even better than the Finite Element Method in problems involving distortions. Nevertheless, in problems with very large distortions a Lagrangian formulation will need of frequent updates of the reference configuration. When such updates are incorporated then zero energy modes are more likely to be activated. When few updates are carried out the error is small but when updates are performed frequently the solution is completely spoilt because of the zero energy modes. In this thesis an updated Lagrangian formulation is developed. It allows to carry out updates of the reference configuration without suffering the appearance of spurious modes. To update the Lagrangian formulation an incremental approach is used: an intermediate configuration will be the new reference configuration for the next time steps. It has been observed that this updated formulation suffers from similar numerical fracture to the Eulerian case. A modal analysis has proven that there exist zero energy modes. In the paper the updated Lagrangian method is exposed in detail, a stability analysis is performed and finally a stabilization technique is incorporated to preclude spurious modes.
CitationVidal Seguí, Y. "Mesh-Free Methods for Dynamic Problems. Incompressibility and Large Strain". Tesi doctoral, UPC, Departament de Matemàtica Aplicada III, 2005. Available at: <http://hdl.handle.net/2117/94020>
URIhttp://hdl.handle.net/2117/94020
DLB.19339-2005
ISBN846891360X
Other identifiershttp://www.tdx.cat/TDX-0303105-165210