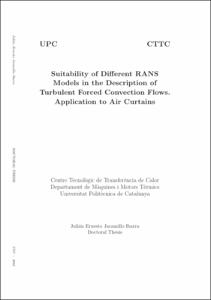 Chair / Department / Institute
Universitat Politècnica de Catalunya. Departament de Màquines i Motors Tèrmics
Document typeDoctoral thesis
PublisherUniversitat Politècnica de Catalunya
Rights accessOpen Access
All rights reserved. This work is protected by the corresponding intellectual and industrial property rights. Without prejudice to any existing legal exemptions, reproduction, distribution, public communication or transformation of this work are prohibited without permission of the copyright holder
Abstract
The main motivation of this thesis is the analysis of turbulent flows. Turbulence plays an important role in engineering applications due to the fact that most flows in industrial equipment and surroundings are in turbulent regime. The thesis has a double purpose and is divided in two main parts. The first one is focussed on the basic and fundamental analysis of turbulence models. In the second part the know-how acquired in the first part is applied to the study of air curtains.

Regarding to the first part, the principal difficulty of computing and modelling turbulent flows resides in the dominance of non-linear effects and the continuous and wide spectrum of time and length scales. Therefore, the use of turbulence modelling employing statistical techniques for high Reynolds numbers or complex geometries is still necessary. In general, this modelization is based on time averaging of the Navier-Stokes equations (this approach is known as Reynolds-Averaged Navier-Stokes Simulations, RANS). As consequence of the average new unknowns, so-called Reynolds stresses, arise. Different approaches to evaluate them are: i) Differentially Reynolds Stress Models (DRSM), ii) Explicit Algebraic Reynolds Stress Models (EARSM), and iii) Eddy Viscosity Models (EVM).

Although EVM models assuming a linear relation between the turbulent stresses and the mean rate of strain tensor are extensively used, they present various limitations. In the last few years, with the even-increasing computational capacity, new proposals to overcome many of these deficiencies have started to find their way. Thus, algebraic or non-linear relations are used to determinate the Reynolds stress tensor without introducing any additional differential equation.

Therefore, the first part of this thesis is devoted to the study of several EARSM and EVM models involving linear and higher order terms in the constitutive relation to evaluate turbulent stresses. Accuracy and numerical performance of these models is tested in different flow configurations such as plane channel, backward facing step, and both plane and round impinging jets. Special attention is paid to the verification of the code and numerical solutions, and the validation of the mathematical models used. In the impinging plane configuration, improvements of models using higher order terms in the constitutive relation are limited. Whereas, in the rest of studied cases these non-linear models show a reasonably good behaviour.

Moreover, taken into account models convergence, robustness and predictive realism observed in the analysis of these benchmark flows, some of them are selected for the study of air curtains and their interaction with the environment where they are placed. Air curtains are generally one or a set of vertical or horizontal plane jets used as ambient separator of adjacent areas presenting different conditions. The jet acts as a screen against energy losses/gains, moisture or mass exchanges between the areas.