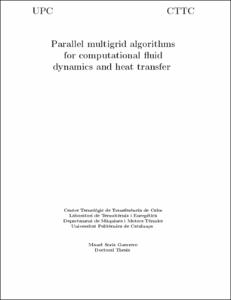 The main purpose of the dissertation is to contribute to the development of numerical techniques for computational heat transfer and fluid flow, suitable for low cost (loosely coupled) parallel computers. It is focused on implicit integration schemes, using finite control volumes with multigrid (MG) algorithms.

Natural convection in closed cavities is used as a problem model to introduce different aspects related with the integration of the incompressible Navier-Stokes equations, such as the solution of the pressure correction (or similar) equations that is the bottleneck of the algorithms for parallel computers. The main goal of the dissertation has been to develop new algorithms to advance in the solution of this problem rather than to implement a complete parallel CFD code.

An overview of different sequential multigrid algorithms is presented, pointing out the difference between geometric and algebraic multigrid. A detailed description of segregated ACM is given. The direct simulation of a turbulent natural convection flow is presented as an application example. A short description of the coupled ACM variant is given.

Background information of parallel computing technology is provided and the the key aspects for its efficient use in CFD are discussed. The limitations of low cost, loosely coupled cost parallel computers (high latency and low bandwidth) are introduced. An overview of different control-volume based PCFD and linear equation solvers is done. As an example, a code to solve reactive flows using Schwartz Alternating Method that runs particularly well on Beowulf clusters is given.

Different alternatives for latency-tolerant parallel multigrid are examined, mainly the DDV cycle proposed by Brandt and Diskin in a theoretical paper. One of its main features is that, supressing pre-smoothing, it allows to reduce the each-to-neighbours communications to one per MG iteration. In the dissertation, the cycle is extended to two-dimensional domain decompositions. The effect of each of its features is separately analyzed, concluding that the use of a direct solver for the coarsest level and the overlapping areas are important aspects. The conclusion is not so clear respect to the suppression of the pre-smoothing iterations.

A very efficient direct method to solve the coarser MG level is needed for efficient parallel MG. In this work, variant of the Schur complement algorithm, specific for relatively small, constant matrices has been developed. It is based on the implicit solution of the interfaces of the processors subdomains. In the implementation proposed in this work, a parallel evaluation and storage of the inverse of the interface matrix is used. The inner nodes of each domain are also solved with a direct algorithm. The resulting algorithm, after a pre-processing stage, allows a very efficient solution of pressure correction equations of incompressible flows in loosely coupled parallel computers.

Finally, all the elements presented in the work are combined in the DDACM algorithm, an algebraic MG equivalent to the DDV cycle, that is as a combination of a parallel ACM algorithm with BILU smoothing and a specific version of the Schur complement direct solver. It can be treated as a black-box linear solver and tailored to different parallel architectures.

The parallel algorithms analysed (different variants of V cycle and DDV) and developed in the work (a specific version of the Schur complement algorithm and the DDACM multigrid algorithm) are benchmarked using a cluster of 16 PCs with a switched 100 Mbits/s network.

The general conclusion is that the algorithms developed are suitable options to solve the pressure correction equation, that is the main bottleneck for the solution of implicit flows on loosely coupled parallel computers.
CitationSoria Guerrero, M. "Parallel multigrid algorithms for computational fluid dynamics and heat transfer". Tesi doctoral, UPC, Departament de Màquines i Motors Tèrmics, 2000. Available at: <http://hdl.handle.net/2117/93989>
URIhttp://hdl.handle.net/2117/93989
DLB-21951-2005
ISBN8468917478
Other identifiershttp://www.tdx.cat/TDX-0317105-153526