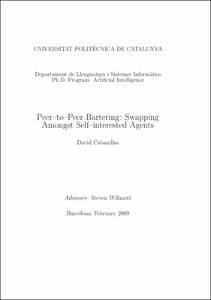 Large--scale distributed environments can be seen as a conflict between the selfish aims of the participants and the group welfare of the population as a whole. In order to regulate the behavior of the participants it is often necessary to introduce mechanisms that provide incentives and stimulate cooperative behavior in order to mitigate for the resultant potentially undesirable availability outcomes which could arise from individual actions.
The history of economics contains a wide variety of incentive patterns for cooperation. In this thesis, we adopt bartering incentive pattern as an attractive foundation for a simple and robust form of exchange to re-allocate resources. While bartering is arguably the world's oldest form of trade, there are still many instances where it surprises us. The success and survivability of the barter mechanisms adds to its attractiveness as a model to study.
In this thesis we have derived three relevant scenarios where a bartering approach is applied. Starting from a common model of bartering:
- We show the price to be paid for dealing with selfish agents in a bartering environment, as well as the impact on performance parameters such as topology and disclosed information.
- We show how agents, by means of bartering, can achieve gains in goods without altruistic agents needing to be present.
- We apply a bartering--based approach to a real application, the directory services.
The core of this research is the analysis of bartering in the Internet Age. In previous times, usually economies dominated by bartering have suffered from high transaction costs (i.e. the improbability of the wants, needs that cause a transaction occurring at the same time and place). Nowadays, the world has a global system of interconnected computer networks called Internet. This interconnected world has the ability to overcome many challenges of the previous times. This thesis analysis the oldest system of trade within the context of this new paradigm. In this thesis we aim is to show that
bartering has a great potential, but there are many challenges that can affect the realistic application of bartering that should be studied.
The purpose of this thesis has been to investigate resource allocation using bartering mechanism, with particular emphasis on applications in largescale distributed systems without the presence of altruistic participants in the environment.
Throughout the research presented in this thesis we have contributed evidence that supports the leitmotif that best summarizes our work: investigation interactions amongst selfish, rational, and autonomous agents with incomplete information, each seeking to maximize its expected utility by means of bartering. We concentrate on three scenarios: one theoretical, a case of use, and finally a real application. All of these scenarios are used for evaluating bartering. Each scenario starts from a common origin, but each of them have their own unique features.
The final conclusion is that bartering is still relevant in the modern world.
CitationCabanillas, D. "Peer-to-Peer Bartering: Swapping Amongst Self-interested Agents". Tesi doctoral, UPC, Departament de Llenguatges i Sistemes Informàtics, 2009. Available at: <http://hdl.handle.net/2117/93969>
URIhttp://hdl.handle.net/2117/93969
DLB.33016-2009
ISBN9788469240571
Other identifiershttp://www.tdx.cat/TDX-0602109-102247