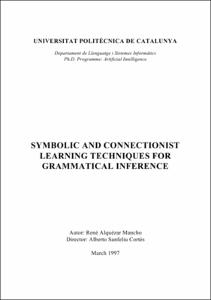 This thesis is structured in four parts for a total of ten chapters.

The first part, introduction and review (Chapters 1 to 4), presents an extensive state-of-the-art review of both symbolic and connectionist GI methods, that serves also to state most of the basic material needed to describe later the contributions of the thesis. These contributions constitute the contents of the rest of parts (Chapters 5 to 10).

The second part, contributions on symbolic and connectionist techniques for regular grammatical inference (Chapters 5 to 7), describes the contributions related to the theory and methods for regular GI, which include other lateral subjects such as the representation oí. finite-state machines (FSMs) in recurrent neural networks (RNNs).

The third part of the thesis, augmented regular expressions and their inductive inference, comprises Chapters 8 and 9. The augmented regular expressions (or AREs) are defined and proposed as a new representation for a subclass of CSLs that does not contain all the context-free languages but a large class of languages capable of describing patterns with symmetries and other (context-sensitive) structures of interest in pattern recognition problems.

The fourth part of the thesis just includes Chapter 10: conclusions and future research. Chapter 10 summarizes the main results obtained and points out the lines of further research that should be followed both to deepen in some of the theoretical aspects raised and to facilitate the application of the developed GI tools to real-world problems in the area of computer vision.
CitationAlquézar Mancho, R. "Symbolic and connectionist learning techniques for grammatical inference". Tesi doctoral, UPC, Departament de Llenguatges i Sistemes Informàtics, 1997. Available at: <http://hdl.handle.net/2117/93962>
URIhttp://hdl.handle.net/2117/93962
DLB.31881-2008
ISBN9788469134535
Other identifiershttp://www.tdx.cat/TDX-0213108-105743