Learning with Feed-forward Neural Networks: Three Schemes to Deal with the Bias/Variance Trade-off 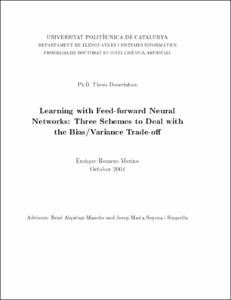 Chair / Department / Institute
Universitat Politècnica de Catalunya. Departament de Llenguatges i Sistemes Informàtics
Document typeDoctoral thesis
PublisherUniversitat Politècnica de Catalunya
Rights accessOpen Access
Abstract
In terms of the Bias/Variance decomposition, very flexible (i.e., complex) Supervised Machine Learning systems may lead to unbiased estimators but with high variance. A rigid model, in contrast, may lead to small variance but high bias. There is a trade-off between the bias and variance contributions to the error, where the optimal performance is achieved.

In this work we present three schemes related to the control of the Bias/Variance decomposition for Feed-forward Neural Networks (FNNs) with the (sometimes modified) quadratic loss function:

3. A modification of the quadratic loss function for classification problems, inspired in Support Vector Machines (SVMs) and the AdaBoost algorithm, named Weighted Quadratic Loss (WQL) function. The modification consists in weighting the contribution of every example to the total error. In the linearly separable case, the solution of the hard margin SVM also minimizes the proposed loss function. The hardness of the resulting solution can be controlled, as in SVMs, so that this scheme may also be used for the non-linearly separable case. The error weighting proposed in WQL forces the training procedure to pay more attention to the points with a smaller margin. Therefore, variance tries to be controlled by not attempting to overfit the points that are already well classified. The model shares several properties with the SVMs framework, with some additional advantages. On the one hand, the final solution is neither restricted to have an architecture with so many hidden units as points (or support vectors) in the data set nor to use kernel functions. The frequencies are not restricted to be a subset of the data set. On the other hand, it allows to deal with multiclass and multilabel problems in a natural way. Experimental results are shown confirming these claims.

A wide experimental work has been done with the proposed schemes, including artificial data sets, well-known benchmark data sets and two real-world problems from the Natural Language Processing domain. In addition to widely used activation functions, such as the hyperbolic tangent or the Gaussian function, other activation functions have been tested. In particular, sinusoidal MLPs showed a very good behavior. The experimental results can be considered as very satisfactory. The schemes presented in this work have been found to be very competitive when compared to other existing schemes described in the literature. In addition, they can be combined among them, since they deal with complementary aspects of the whole learning process.
CitationRomero Merino, E. Learning with Feed-forward Neural Networks: Three Schemes to Deal with the Bias/Variance Trade-off. Tesi doctoral, UPC, Departament de Llenguatges i Sistemes Informàtics, 2004. ISBN 8468909726. Available at: <http://hdl.handle.net/2117/93955>
URIhttp://hdl.handle.net/2117/93955
DLB.15688-2005
ISBN8468909726
Other identifiershttp://www.tdx.cat/TDX-0207105-135651
Collections
Share: