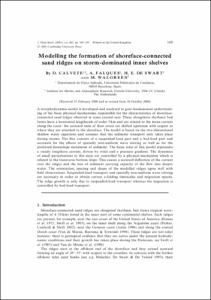 Except where otherwise noted, content on this work is licensed under a Creative Commons license : Attribution-NonCommercial-NoDerivs 3.0 Spain
Abstract
A morphodynamic model is developed and analysed to gain fundamental understanding of the basic physical mechanisms responsible for the characteristics of shorefaceconnected sand ridges observed in some coastal seas. These alongshore rhythmic bed forms have a horizontal lengthscale of order 5 km and are related to the mean current along the coast: the seaward ends of their crests are shifted upstream with respect to where they are attached to the shoreface. The model is based on the two-dimensional shallow water equations and assumes that the sediment transport only takes place during storms. The flux consists of a suspended-load part and a bed-load part and accounts for the e ects of spatially non-uniform wave stirring as well as for the preferred downslope movement of sediment. The basic state of this model represents a steady longshore current, driven by wind and a pressure gradient. The dynamics of small perturbations to this state are controlled by a physical mechanism which is related to the transverse bottom slope. This causes a seaward deflection of the current over the ridges and the loss of sediment carrying capacity of the flow into deeper water. The orientation, spacing and shape of the modelled ridges agree well with eld observations. Suspended-load transport and spatially non-uniform wave stirring are necessary in order to obtain correct e-folding timescales and migration speeds. The ridge growth is only due to suspended-load transport whereas the migration is controlled by bed-load transport.
CitationCalvete, D. [et al.]. Modelling the formation of shoreface-connected sand ridges on storm-dominated inner shelves. "Journal of fluid mechanics", Agost 2001, vol. 441, p. 169-193.
URIhttp://hdl.handle.net/2117/9394
DOI10.1017/S0022112001004815
ISSN0022-1120
Publisher versionhttp://journals.cambridge.org/action/displayAbstract?aid=82975
Collections
Share: