New developments on preparation of cooled and bunched radioactive ion beams at ISOL-Facilities: the ISCOOL project and the rotating wall cooling 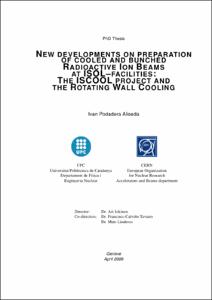 Show full item record
Podadera Aliseda, Ivan
Tutor / director / evaluatorJokinen, Ari; Calviño, F. (Francisco); Lindroos, Mats
Chair / Department / Institute
Universitat Politècnica de Catalunya. Departament de Física i Enginyeria Nuclear
Document typeDoctoral thesis
PublisherUniversitat Politècnica de Catalunya
Rights accessOpen Access
Abstract
Last years have become very productive for the research, construction and development of new facilities devoted to the production of beams with exotic radioisotopes (Radioactive Ion Beams, RIB). These beams are later used for experiments in fields like nuclear physics, atomic physics, astrophysics or medicine, among others. Within this kind of facilities, the ISOL facilities stand out. They are based on the on-line separation of radioactive isotopes produced in nuclear reactions between a target and a high-energy proton beam. The ISOL method was the pioneer for these facilities and it has kept up to now the leadership of RIB facilities. The main reason is ISOLDE, an ISOL facility located at CERN, the largest accelerator complex in the world, where this doctoral thesis has been carried out.
The first innovation which is described is the design of an ion trap for the cooling and bunching of RIB's for ISOLDE, the so-called ISCOOL (ISOLDE COOLer). It is an Radio Frequency Quadrupole ion Cooler and Buncher (RFQCB), device based on the Paul traps. In these traps, the ions are confined in the three dimensions by electric fields. The ions are confined on the transverse plane with the pseudopotential well created by the Radio Frequency Quadrupole (RFQ) and focused on the longitudinal axis. At the same time, a gas (normally helium) fills the chamber with a pressure between 10-3 and 10-2 mbar. The collisions between the atoms or molecules of the gas and the ions. In addition, to drive the ions to the extraction of the RFQCB, an axial electric field is created by segmented electrodes. Different voltages are applied to these electrodes in order to choose the shape of the field. The shape can be chosen to create a potential well close to the extraction from the RFQCB in which the ions are accumulated and extracted as bunches, by the fast-switch of the voltages applied to the axial electrodes.
The new ISCOOL will be installed as a permanent device of the ISOLDE beam lines.
CitationPodadera Aliseda, I. New developments on preparation of cooled and bunched radioactive ion beams at ISOL-Facilities: the ISCOOL project and the rotating wall cooling. Tesi doctoral, UPC, Departament de Física i Enginyeria Nuclear, 2006. ISBN 9788469263440. Available at: <http://hdl.handle.net/2117/93930>
URIhttp://hdl.handle.net/2117/93930
DLB.42208-2009
ISBN9788469263440
Other identifiershttp://www.tdx.cat/TDX-0922109-121453
Collections
Share: