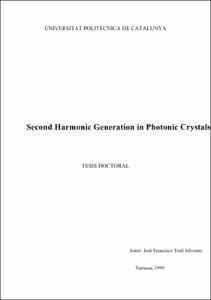 Photonic crystals emerged at the end of the last decade as a new frame to control the interaction between radiation and matter. The potential advances that such structures could report in photonics technology has lead to an increasing research focused on the implementation of photonic crystals possessing full photonic band gaps, hindering the fact that more simple structures, possessing band gaps in selected directions of space, may also provide strong control of the electromagnetic radiation leading to the observation of many new interesting phenomena. In fact, the scope of this control is not limited to a linear interaction and can be extended to nonlinear interactions of any order.

In this work we present a study of the second order nonlinear interaction from nonlinear organic molecules placed within two different types of photonic crystals. First, we will discuss the enhancement and inhibition of the radiation at the second-harmonic frequency of a sheet of dipoles embedded in a 1D photonic crystal. The experimentally observed reflected second-harmonic intensity as a function of the angle of incidence shows sharp resonances corresponding to the excitation of the SH field in a local mode within the forbidden band in the structure, which position depends on the size of the defect, and additional resonance at the high angular band edge, which position is independent of the size of the defect. Comparison among these results and the SH intensity reflected by the same monolayer in free space (which presents a bell shaped radiation pattern as a function of the angle of incidence), shows an enhancement of the radiation at the resonances, and strong inhibition of the radiation at other angles within the gap. Theoretical simulation of the experiment shows a good agreement with the experimental results.

A detailed analysis of the enhancement and inhibition phenomena occurring in these structures shows a clear dependence of the resulting intensity with the position of the monolayer within the defect and with the dipole orientation. The change in phase difference between the oscillating dipoles and the field at the SH frequency at the monolayer as it is moved within the defect is found to play a determining role in the final energy transfer to the second-harmonic field. The resulting enhancement and inhibition of the radiation may be studied in terms of a nonsymmetric contribution of the different components of the field to the energy transfer process.

The second configuration studied in the present work consider the experimental demonstration of second-harmonic generation in a 3-dimensional macroscopically centrosymmetric lattice formed by spherical particles of optical dimensions. In such photonic crystals, the local breaking of the inversion symmetry at the surface of each sphere, allows for the existence of a nonvanishing second order interaction. The growth of the SH radiation is provided by the phase-matching mechanism caused by the bending of the photon dispersion curve near the Bragg reflection bands of this photonic crystal. Experimental evidence of this phase-matching mechanism, inherent of such crystals, is reported in this work. By measuring the SH intensity radiated from several crystals with different concentrations, we obtained the angular dependence of this type of emission and confirmed the surface character of the nonlinear interaction. A simplified theoretical model shows very good agreement with the experimental results. It is important to notice that in this mechanism of SHG, the nonlinearity of the molecule is independent of the phase-matching mechanism, that is inherent to the periodicity of the crystal.