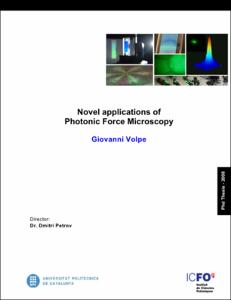 The ability of detecting farces and torques at the micro-and nano-scale is fundamental. When this Thesis started, various scanning probe techniques had already been developed to probe the mechanical properties of microsystems. In 1993 Ghislain and coworkers devised a new scanning force microscopy using an optically trapped microsphere as a probe. This technique was later called Photonic Force Microscope (PFM).

A typical PFM comprises an optical trap that holds a probe - a dielectric or metallic particle of micrometer size, which randomly moves due to Brownian motion In the potential well formed by the optical trap - and a position sensing system. The analysis of the thermal motion provides information about the local forces acting on the particle. The three-dimensional probe position can be recorded through different devices, which detect the forward or backward scattered light from the particle.

The PFM had been applied to measure forces in the range of femto- to pico-Newton - well below the limits of what can be achieved with techniques based an micro-fabricated mechanical cantilevers, such as AFM - in many different fields with exciting applications, for example, in biophysics, equilibrium and nonequilibrium thermodynamics of small systems, and colloidal physics.

We defined various problems that deserved our attention. All of them concerned the enhancement of the possibilities of the PFM, either by applying the PFM to new fields or by making it more powerful.

These are the main results:
1. Brownian motion in an nonhomegeneous force field and Photonic Torque Microscope
We reported how to expand the PFM technique to deal with force fields varying on the scale of the Brownian motion. We also proposed a concrete analysis workflow to reconstruct the force field from the experimental time series of the probe position. In particular, we analyzed the PFM probe movement in the presence of a torque. The value of the torque is found from the auto- and cross-correlation functions of the particles coordinates. We experimentally detected the torque exerted onto an optically trapped particle by an optical beam with orbital angular momentum.

2. Backscattering position detection
We studied theoretically the probe displacement sensitivity in back-scattering and forward-scattering geometry. To achieve this aim an original calculation procedure based on Mie scattering theory was developed and realized on MatLab platform. The calculation results were compared with known experimental data.

3. Surface Plasmon (SP) Radiation Farces
We reported the first experimental observation of the momentum transfer from a SP to a single dielectric sphere. We showed that the force at resonance conditions resulted enhanced 40 times compared to nonresonant illumination. We also reported a quantitative analysis of 20 surface-plasmon-based optical tweezers at a patterned metal surface.

4. Characterization of microscopic flows
We suggested an approach to microrheology based on optical traps capable of measuring fluid fluxes around singular points. The concept was to monitor the position of an optically trapped probe in order to locally characterize the drag torte field as a generic function of the space coordinates up to the first order in its Taylor expansion around the probe position. We experimentally demonstrated this technique, applying it to the charactedeation of controlled flows.

5. Cell dynamics in an optical trap
We reported the analysis of the forward scattered light from a single optically trapped cell during its growth. We showed that the cell continued adjusting itself to the applied optical force because of the growth processes, and hence it kept changing its orientation in the trap. We pointed out the relevance of these findings for single optically trapped cell spectroscopic measurements. We also demonstrated the possibility of monitoring the cytoskeleton structural transformations in optically trapped yeast cells (S. cerevisiae ) using this technique.