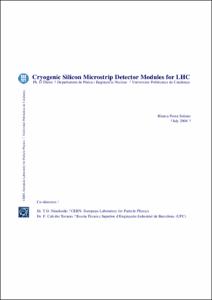 CERN is presently constructing the LHC, which will produce collisions of 7 TeV protons in 4 interaction points at a design luminosity of 1034 cm-2 s-1. The radiation dose resulting from the operation at high luminosity will cause a serious deterioration of the silicon tracker performance. The state-of-art silicon microstrip detectors can tolerate a fluence of about 3·1014 cm-2 of hadrons or charged leptons. This is insufficient for long-term operation in the central parts of the LHC trackers, in particular after the possible luminosity upgrade. By operating the detectors at cryogenic temperatures the radiation hardness can be improved by a factor 10.
This work proposes a cryogenic microstrip detector module concept which has the features required for the upgraded LHC experiments at CERN. The module can hold an edgeless sensor, being a good candidate for improved luminosity and total cross-section measurements. The design of such a module is constrained by the requirements on radiation hardness and minimal mass. The choice of the component materials is guided by the properties of the silicon sensors, and the main criteria include best possible matching of the thermal dilatation, high thermal conductivity and appropriate elastic properties, in addition to the radiation resistance.
A module design is proposed where, apart from the silicon sensor, both the support plate and the pitch adapter are processed on silicon. Future design options may also feature hybrids processed in silicon using thick-film techniques and cooling microchannels directly micromachined into the support plate. The best performance and highest degree of integration of the cooling is achieved with two-phase flow (high heat transfer coefficient) argon running through capillary pipes embedded in a CFC spacer close to the heat sources. A series of thermal tests have shown that silicon is an excellent heat spreader and its use as a structural material leads to a uniform temperature distribution in the sensor and support plate. The thermal resistance due to the glue layers dominates the thermal behaviour.
The thermoelastic properties of the epoxies are key factors in the design. A series of samples were prepared to measure these properties of Araldite® 2011, Stycast® 1266 and Type L epoxies filled with fused quartz powder, as a function of temperature. Filling these epoxies reduces their thermal dilatation, nearly matching that of metals. This reduces the stress in the joints when cooling down. However, filling increases the Young modulus (E) of the epoxy so much, that the thermal stress increases with the filling factor. Furthermore, filling increases the viscosity and leads to thicker glue layers, which also increases the thermal stress in silicon. The idea of using filled epoxy was therefore abandoned. The E of unfilled epoxies at 77 K is between 4 and 8 times higher than that measured at 300 K. Thin layers of epoxy should be used to minimize the stress on the silicon substrate.
Precision gluing jigs were designed and produced to assemble the prototype modules. The alignment with respect to the beam is done using a warm support plate, placed between the module and the vacuum chamber. The module is attached to this support structure through three thermally isolating precision support posts with dowels. The position of the module and its readout strips is thus accurately referred to the vacuum chamber, which itself can be aligned in the test beam line using optical targets.
A first electrical prototype module was assembled using a 50 ?m pitch silicon microstrip sensor (32.5 cm2). Pitch adapter and support plate were processed on silicon. The CMS hybrid with APV25 readout chips was characterized at low temperature. First results were obtained down to 210 K, showing a decrease of the noise and the rise time and an increase of the pulse peak height with respect to the room temperature behaviour.
A pair of edgeless silicon diode pad sensors was exposed to the X5 high-energy pion beam, in order to determine the edge sensitivity. A high-resistivity silicon p+-i-n+ planar diode detector (0.25 cm2) was diced through its front p+ implant to produce two halves of edgeless diode pad sensors. A large surface current on such an edge prevents the normal reverse biasing of this device but it can be sufficiently reduced by the use of a suitable cutting method, followed by edge treatment and by operating the sensor at low temperature. The gap width between the edgeless sensors, determined using the tracks measured by a reference telescope, was compared with metrology measurements. It was concluded that the depth of the dead layer is compatible with zero within the statistical accuracy of 8 µm and systematic accuracy of 6 µm.
CitationPerea Solano, B. "Cryogenic Silicon Microstrip detector modules for LHC". Tesi doctoral, UPC, Departament de Física i Enginyeria Nuclear, 2004. Available at: <http://hdl.handle.net/2117/93915>
URIhttp://hdl.handle.net/2117/93915
DLB.46981-2004
ISBN8468889520
Other identifiershttp://www.tdx.cat/TDX-0909104-082148