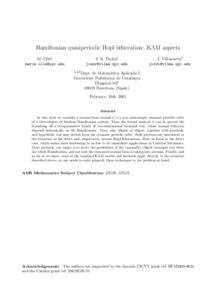 Document typeArticle
Rights accessOpen Access
Abstract
In this work we consider a normal form around a 1:-1 non semi-simple resonant periodic orbit of a three-degree of freedom Hamiltonian system. From the formal analysis it can be proved the branching off a two-parameter family of two-dimensional invariant tori, whose normal behavior depends intrinsically on the Hamiltonian. Thus, only elliptic or elliptic, together with parabolic and hyperbolic tori may detach form the resonant periodic orbit. Both patterns are mentioned in the literature as the direct and, respectively, inverse Hopf bifurcations. Here we focus in the direct case, which seems more interesting to us due to its immediate applications in Celestial Mechanics. More precisely, our target is to prove the persistence of the (normally) elliptic invariant tori when the whole Hamiltonian, and not only the truncated normal form is taking into account. Finally, and as far as we know, none of the standard KAM results and methods apply directly to the situation described above, so one needs to suite properly these techniques to the problem at hand.
URIhttp://hdl.handle.net/2117/939
Collections
Share: