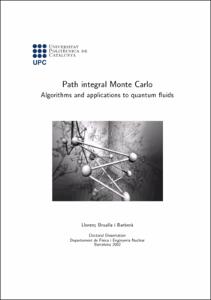 ; Casulleras, Joaquim
Chair / Department / Institute
Universitat Politècnica de Catalunya. Departament de Física Aplicada
Document typeDoctoral thesis
PublisherUniversitat Politècnica de Catalunya
Rights accessOpen Access
Abstract
Path integral Monte Carlo (PIMC) is a method suitable for quantum liquid simulations at finite temperature. We present in this thesis a study of PIMC dealing with the theory and algorithms related to it, and then two applications of PIMC to current research problems of quantum fluids in the Bolzmann regime.
The first part encompasses a study of the different ingredients of a PIMC code: action, sampling and physical property estimators. Particular attention has been paid to Li-Broughton's higher order approximation to the action. Regarding sampling, several collective movement methods have been derived, including the bisection algorithm, that has been thoroughly tested. We also include a study of estimators for different physical properties, such as, the energy (through the thermodynamic and virial estimators), the pair distribution function, the structure factor, and the momentum distribution.
In relation to the momentum distribution, we have developed a novel algorithm for its estimation, the trail method. It surmounts some of the problems exposed by previous approaches, such as the open chain method or McMillan's algorithm.
The Richardson extrapolation used within PIMC simulations, is another contribution of this thesis. Up until now, this extrapolation has not been used in this context. We present studies of the energy dependence on the number of "beads", along with the betterment provide by the Richardson extrapolation.
Inasmuch as our goal is to perform research of quantum liquids at finite temperature, we have produced a library of codes, written from scratch, that implement most of the features theoretically developed. The most elaborated parts of these codes are included in some of the appendixes.
The second part shows two different applications of the algorithms coded. We present results of a PIMC calculation of the momentum distribution of Ne and normal 4He at low temperatures. In the range of temperatures analysed, exchanges can be disregarded and both systems are considered Boltzmann quantum liquids. Their quantum character is well reflected in their momentum distributions witch show clear departures from the classical limit. The PIMC momentum distributions which show clear departures from the classical limit. The PIMC momentum distributions are sampled using the trail method. Kinetic energies of both systems, as a function of temperature and at a fixed density, are also reported.
Finally, the solid-liquid neon phase transition along the 35 K isotherm has been characterized.While thermodynamic properties of the solid phase are well known the behaviour of some properties, such as the energy or the dessity, during the trasition presen6 some uncertainties For example, experimental data for the place diagram, which determines solid and liquid boundaries, present sizeable differences. The temperature chosen is high enough so that Bose or Fermi statistics corrections are small, although the system is strongly quantum mechanical. The results obtained show a discontinuity in the kinetic energy during the transition.
CitationBrualla Barberà, L. Path integral Monte Carlo. Algorithms and applications to quantum fluids. Tesi doctoral, UPC, Departament de Física Aplicada, 2002. ISBN 8469992910. Available at: <http://hdl.handle.net/2117/93888>
URIhttp://hdl.handle.net/2117/93888
DLB.39331-2002
ISBN8469992910
Other identifiershttp://www.tdx.cat/TDX-0716102-143333
Collections
Share: