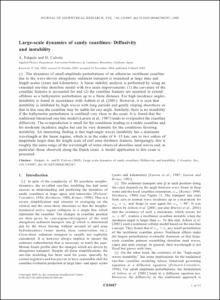 The dynamics of small-amplitude perturbations of an otherwise rectilinear coastline due to the wave-driven alongshore sediment transport is examined at large time and length scales (years and kilometers). A linear stability analysis is performed by using an extended one-line shoreline model with two main improvements: (1) the curvature of the coastline features is accounted for and (2) the coastline features are assumed to extend offshore as a bathymetric perturbation up to a finite distance. For high incidence angles, instability is found in accordance with Ashton et al. (2001). However, it is seen that instability is inhibited by high waves with long periods and gently sloping shorefaces so that in this case the coastline may be stable for any angle. Similarly, there is no instability if the bathymetric perturbation is confined very close to the coast. It is found that the traditional linearized one-line model (Larson et al., 1987) tends to overpredict the coastline diffusivity. The overprediction is small for the conditions leading to a stable coastline and for moderate incidence angles but can be very dramatic for the conditions favoring instability. An interesting finding is that high-angle waves instability has a dominant wavelength at the linear regime, which is in the order of 4–15 km, one to two orders of magnitude larger than the length scale of surf zone rhythmic features. Intriguingly, this is roughly the same range of the wavelength of some observed shoreline sand waves and, in particular, those observed along the Dutch coast. A model application to this coast is presented.
CitationFalqués, A.; Calvete, D. Large-scale dynamics of sandy coastlines: diffusivity and instability. "Journal of geophysical research", Març 2005, vol. 110, núm. C03007, p. 1-15.
URIhttp://hdl.handle.net/2117/9381
DOI10.1029/2004JC002587
ISSN0148-0227