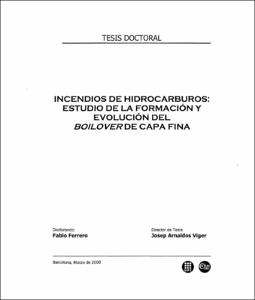 Chair / Department / Institute
Universitat Politècnica de Catalunya. Departament d'Enginyeria Química
Document typeDoctoral thesis
PublisherUniversitat Politècnica de Catalunya
Rights accessOpen Access
Abstract
Though the number of studies on pool fires is relevant, the characteristics of boilover are not yet totally understood. Boilover is one of the most dangerous phenomena that can occur when the fuel is burning above a water layer; in this situation, due to heat transfer from the flame, water can reach ebullition and the consequent eruptive expulsion of vapour bubbles, drags fuel into the flame, increasing the thermal effect and the dimension of the fire. The phenomenon can present itself in two forms, depending on the fuel layer thickness, the hot zone boilover and the thin layer boilover, which boundaries are not yet well defined.

Thus, this work can prove to be very important, since it aims to step forward in the knowledge of boilover, by defining in a clearer form its mechanisms and its effects, at a scale representative of a real fire scenario. The experiments realized concerned thin layer boilover, due to economical and security limitations; nevertheless, when it was possible, data have been extrapolated to situations of hot zone boilover.

In order to carry on the study, an experimental facility was remodelled and enhanced; the facility has 5 circular pools of diameter ranging from 1.5 to 6 m. A series of thermocouples was used to determine the fuel and water temperatures. Other thermocouples were employed to analyze flame temperature distribution. Moreover, from the experiences much information was obtained, such as burning rate values, video-recordings (in the visible and IR field), intensity of radiation emitted to the exterior, atmospheric condition evolution, etc. Data proceeding from three experimental series, performed by CERTEC (Centre d'Estudis del Risc Tecnològic) since 1999, were analyzed.

In great detail, the fundamental parameters of thin layer boilover (on-set time, pre-boilover burned mass ratio, boilover intensity, radiation intensity, etc.) as a function of the characteristics of the experiments (pool diameter, fuel type, fuel thickness, etc.) were studied.
New correlations to estimate average and maximum flame length during the stationary period and the thin layer boilover, were obtained. Effects of the phenomenon on flame tilt and pulsation were also considered.
Moreover, in order to calculate the increase to apply to safety distances in case of occurrence of the phenomenon, a semi-empirical model to estimate thermal effects during thin layer boilover was determined.

The analysis of the distribution of the temperatures inside the water layer showed that, working with small fuel layers, there is no formation of a proper hot zone. It was only possible to determine a much reduced high temperature zone, which did not increase in thickness or temperature and has been named pseudo hot zone.
Finally, a mathematical model to predict temperature distribution inside the liquid layer (fuel and water) during the process that leads to thin layer boilover was developed. The model, which showed the great importance of the convection inside the fuel for the heat transfer, was later modified and extended, in order to simulate the boilover phenomenon in a general form. The predictions of the model fit very well experimental data from this thesis and from previous publications. Furthermore, the results obtained allowed to observe that a combination of Prandtl and Fourier number can help in deciding the possibility and the type of boilover
CitationFerrero, F. Incendios de hidrocarburos : estudio de la formación y evolución del boilover de capa fina. Tesi doctoral, UPC, Departament d'Enginyeria Química, 2006. ISBN 9788469346976. Available at: <http://hdl.handle.net/2117/93794>
URIhttp://hdl.handle.net/2117/93794
DLB.34047-2010
ISBN9788469346976
Other identifiershttp://www.tdx.cat/TDX-0602110-124956
Collections
Share: