Application of molecular simulation techniques to the design of nanosystems 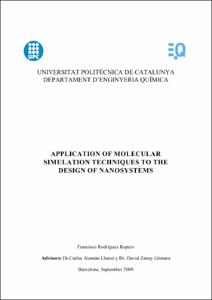 Chair / Department / Institute
Universitat Politècnica de Catalunya. Departament d'Enginyeria Química
Document typeDoctoral thesis
PublisherUniversitat Politècnica de Catalunya
Rights accessOpen Access
Abstract
Nanotechnology is a multidisciplinary branch of science and technology that involves a widerange of different fields such as chemistry, materials science, physics or chemical engineeringwhose goal is the production of new functional materials and devicesthrough the control of their organization at the atomic and molecular scale.
Nanotechnology has jumped from research laboratories to our daily life and today all theprogresses made in this field have been translated into direct applications in different fields being electronics and computer science and biomedicine, where the most striking advances have beendone.
What differences nanotechnology from traditional chemistry and physics can be summarized inthree points: (i) Analysis and control of the matterat the atomic and molecular level focusing in individual atoms; (ii) the appearance of novel physical properties because of the nanoscopicdimensions; (iii) the possibility of generating new complex functional systems with novelproperties.
Modeling and theory are becoming vital to designing and improving nanodevices. The intrinsicnature of nano and supramolecular scale that involves tens, hundreds and thousands of atomsmakes computational chemistry the perfect ally to design new devices and predict their properties. Computational chemistry provides the perfect tools to describe the electronic structureand the dynamic behavior, as well as the properties derived from them, through quantummechanics and classical mechanics formalisms.
The suitability of such techniques in the design and improvement of nanodevices as well as theprediction of their properties is clearly proven throughout the four blocks in which this thesis isdivided:
· Nanotubes based on natural peptide sequences
Nanotubes have gained extensive interest because of their applicability in different fieldsranging from medicine to electronics. Among nanotubes, those based on natural peptidesequences taken from some natural proteins with a tubular or fibrillar motif are gaining a
broad attention because of their high biocompatibility, the possibility of adding functionalitiesby tuning them and their potentiality to self-assemble. The enhancement of the ability to retain the tubular geometry of such structures can be achieved by substituting targeted amino acids located in the more flexible parts of the nanoconstruct by synthetic amino acids withlow conformational flexibility providing a larger rigidity to the overall structure.
· Dendronized polymers
Dendronized polymers are a specific kind of macromolecule structure that consists of a linearpolymeric backbone where dendritic units are attached regularly leading to a highly branchedthree-dimensional architecture. This fact provides dendronized polymers the peculiarity of the coexistence within the same macromolecule of three topological regions: (i) the internalbackbone; (ii) the dendron region around the backbone and (iii) the external surface. Thesemolecules have a wide range of applications in different fields such as biomedical engineering, host-guest chemistry or catalysis.
· Theoretical study of ð-conjugated systems
Conducting polymers are polymers bearing a characteristic polyconjugated nature which makethem electronic conductors. In particular thiophene-based conducting polymers have been widely studied because of their electric and nonlinear optical properties, excellent environmentalstability and relatively low cost of production. Due to the crucial role played by the electronicstructure of these systems in their relevant properties, a good knowledge of it is a key factor todesign and improve new conducting polymers. To achieve this goal QM calculations suitperfectly to get accurate estimates of such properties.
· Molecular actuators and sensors based on conducting polymers
Both experimental and computational research in nanoactuators and nanosensors are widelyreported in the literature. Among them, those based in conducting polymers are flourishingbecause of their great transport properties, electrical conductivity or rate of energy migrationwhich provide amplified sensitivity in nanosensors and a rapid response in nanoactuators. In thissense electron-rich thiophene-based oligomers and polymers combined with versatilecalix[4]arenes units are presented in the present thesis. Calix[4]arenes are synthetic macrocyclic molecules consisting of four phenol or anisole rings connected via methylene bridges that canhost different guest molecules leading to conformational rearrangement of the whole device making it useful to be employed as a sensor or actuator.
Description
Premi extraordinari doctorat curs 2009-2010, àmbit d’Enginyeria Industrial
CitationRodríguez Ropero, F. Application of molecular simulation techniques to the design of nanosystems. Tesi doctoral, UPC, Departament d'Enginyeria Química, 2009. ISBN 9788469305522. Available at: <http://hdl.handle.net/2117/93790>
Award-winningAward-winning
URIhttp://hdl.handle.net/2117/93790
DLB.15447-2010
ISBN9788469305522
Other identifiershttp://www.tdx.cat/TDX-0122110-175018
Collections
Share: