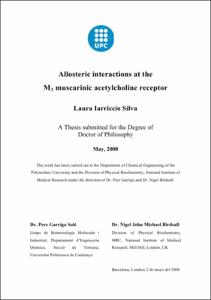 ; Birdsall, Nigel John Michael
Chair / Department / Institute
Universitat Politècnica de Catalunya. Departament d'Enginyeria Química
Document typeDoctoral thesis
PublisherUniversitat Politècnica de Catalunya
Rights accessOpen Access
Abstract
The extracellular loops of muscarinic acetylcholine receptors are predicted to play a role in the binding and regulation of allosteric modulators. Furthermore, the sequence of the five subtypes of muscarinic receptors shows a large degree of diversity in this region. M3 receptor mutants, K523E, D518K and N132G, in which the substituted residues were those corresponding to the M1 subtype, were studied. As the amino acids in positions 518 and 523 are charged, the uncharged mutants, K523Q and D518N, were also created in order to observe any possible effect of charge. One question examined is whether these mutations changed the binding of orthosteric and allosteric ligands, generating a M1 receptor phenotype.

Radioligand binding experiments revealed that one mutant, K523E, had a profound potentiating effect on the binding of prototypical modulators like gallamine, strychnine, brucine and N-chloromethylbrucine, but had minimal effects on the binding of a number of orthosteric ligands, including [3H]N-methylscopolamine ([3H]NMS) and acetylcholine (ACh). The increase in affinity was found at both the unoccupied and [3H]NMS-occupied receptors, with up to 70 fold increases in affinity being observed. Switches from negative to positive cooperativity for some strychnine-related compounds were found.

At K523E, the affinities of the strychnine-related ligands were also increased up to 160 fold at the receptor-ACh complex, with up to 35 fold positive cooperativity being observed. Positive cooperativity of this magnitude is the highest that has been reported for M3 receptors.
The dramatic changes in cooperativities and affinities of allosteric ligands at K523E did not result in generation of the M1 phenotype. The K523Q data suggest that the large changes in K523E result from the introduction of the negatively charged glutamate residue and not the loss of the positively charged lysine. The effect of K523E seems to be solely on the binding of allosteric ligands and the transmission of the effects of their binding to the orthosteric site.
For the ligands acting at the gallamine site, all the effects of the allosteric modulators on ACh binding have been reproduced in functional studies, indicating that the allosteric modulation, seen in binding, is transmitted to the cellular response. A novel and unexpected finding is that WIN62,577 is an allosteric agonist at M3 muscarinic receptors and at K523E and N132G. The study also revealed that nanomolar concentrations of ACh may be present in assays of muscarinic receptor function and may give misleading interpretations of data. These artefacts were removed by preincubation with acetylcholinesterase, a control not previously used in functional studies of muscarinic receptors.

The sensitivity of the binding of both orthosteric and allosteric ligands to the composition of the binding assay buffer has also been investigated in detail. In a phosphate buffer of low ionic strength (PB) the affinity constants of all the compounds studied, both orthosteric and allosteric, were increased, relative to a Hepes buffer of higher ionic strength, except for WIN 62,577, an allosteric ligand which binds to a different allosteric site from the prototypical modulators, and SVT-40776 a new M3 selective antagonist, indicating their different modes of binding. Cooperativities have also been switched from negative to positive by changing buffer.

The possible location of K523, relative to other residues on the external loops of muscarinic receptors shown to be important for the binding of allosteric ligands, has been explored using different models based on the X-ray structures of rhodopsin and the â2 adrenergic receptor.
CitationIarriccio Silva, L. Allosteric interactions at the M3 muscarinic acetylcholine receptor. Tesi doctoral, UPC, Departament d'Enginyeria Química, 2008. ISBN 9788469199954. Available at: <http://hdl.handle.net/2117/93780>
URIhttp://hdl.handle.net/2117/93780
DLB.15746-2009
ISBN9788469199954
Other identifiershttp://www.tdx.cat/TDX-1106108-092739
Collections
Share: