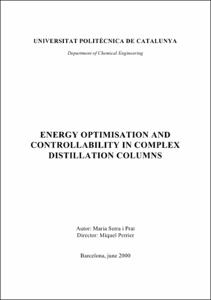 Chair / Department / Institute
Universitat Politècnica de Catalunya. Departament d'Enginyeria Química
Document typeDoctoral thesis
PublisherUniversitat Politècnica de Catalunya
Rights accessOpen Access
Abstract
To extend the knowledge of complex distillation arrangements for the separation of ternary mixtures and make them closer to implementation in industry is the motivation of this thesis work. Some design, operation, and control aspects are analysed, having the conventional distillation arrangements as comparison basis.
The DWC is a complex distillation arrangement very attractive in terms of energy and cost savings. However, the DWC require large columns in order to be economically advantageous. Therefore, this arrangement is more attractive when the energy cost is high compared to the trays cost. From rigorous simulations of different separation examples, some synthesis rules have been obtained.
Designs that minimise the distillation cost have been given special importance. DWC design procedures reported in the literature were based on only two decision variables. A new procedure that uses three decision variables for design optimisation has been proposed. It has been seen that the use of three decision variables is important to avoid excluding possible optimum designs.
The control of the DWC is more complex than the control of the other distillation arrangements because the DWC has more operation degrees of freedom. The approach in this work has been to solve the DWC control by levels: stabilisation, composition control, and optimising control.
When the manipulated variables for DWC stabilisation control are the distillate and the bottoms flowrate, which is the most common stabilisation control structure in the literature, the DWC presents high directionality and interaction. Besides, this stabilisation control structure is not appropriate to the DWC because the DWC has typically high reflux ratios. When the manipulated variables for stabilisation control are the reflux flowrate and the boilup, the DWC has better controllability and larger stability margins. Linear analysis tools are useful to select the set of manipulated variables for the DWC composition control. The preferred set of manipulated variables and the controllability of the corresponding control structure depend on the nominal operation. The DWC has two extra operation degrees of freedom that permit an operation optimisation. This optimisation is used to minimise the boilup. At a non-optimal operation, the controllability is improved. Therefore, a trade-off appears between operation optimisation and controllability.
Changes in the design of the DWC can be used to improve its controllability. High directionality is a problem associated to DWC that may be improved using a large number of trays. On the other hand, DWC optimal designs have an equilibrated distribution of distillation effort between sections which, if broken, may also present improve the controllability. As found for operation, also for design, leaving optimal conditions permits to improve the controllability.
Alternatively, for the composition control of the DWC, Dynamic Matrix Control is analysed. It is found that DMC performs worse than the diagonal feedback control strategy.
The DWC extra operation degrees of freedom can be used dynamically for optimising control. Due to a marked directionality found in the response surface, DWC operation may be kept close to optimal operation using only one of the operation degrees of freedom. Optimising control of the DWC through the feedback control of a variable that characterises the optimal operation is possible. Some measurable variables are able to maintain optimal conditions with certain accuracy.
The controllability of the DWC is compared to the controllability of other distillation arrangements. In general, the complexity of a distillation arrangement makes its energy efficiency better and its controllability worse. However, important exceptions have been found:
- The DWC may give important energy savings as well as the best controllability if it is operated at non-optimal conditions.
- When the manipulated variables for stabilisation are internal flows (reflux rates and boilups), the controllability of the DWC is better than the controllability of the other distillation arrangements.
The DWC controllability is found to be more interesting for long columns. Therefore, the DWC needs long columns to be really attractive in terms of energy as well as in terms of controllability.
In the literature, DWC controllability was misevaluate. In this thesis work, it is seen that, thanks to the arrangement complexity, the DWC may give at the same time energy savings and a good controllability, what makes it very attractive.
To know the influence of the non-modelled detail and to obtain experimental results for the DWC is the most important step in the way to DWC implementation in industry.
CitationSerra, M. Energy optimisation and controllability in complex distillation columns. Tesi doctoral, UPC, Departament d'Enginyeria Química, 2000. ISBN 9788469134498. Available at: <http://hdl.handle.net/2117/93772>
URIhttp://hdl.handle.net/2117/93772
DLB.31936-2008
ISBN9788469134498
Other identifiershttp://www.tdx.cat/TDX-0204108-094245
Collections
Share: