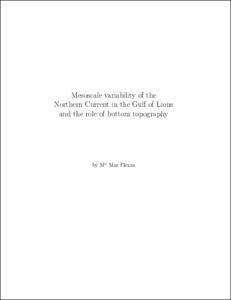 Chair / Department / Institute
Universitat Politècnica de Catalunya. Departament d'Enginyeria Hidràulica, Marítima i Ambiental
Document typeDoctoral thesis
PublisherUniversitat Politècnica de Catalunya
Rights accessOpen Access
Abstract
The Northern Current flows cyclonically contouring the continental slope in the NW Mediterranean. At the entrance of the Gulf of Lions this current is about 20 -- 30 km wide and flows along the deepest half of the continental slope, i.e. over the 1000 to 2000 m isobaths approximately. Surface speeds are of 30 -- 50 cm s^{-1}. In the MATER HFF experiment (March -- May 1997) mesoscale variability of the Northern Current is observed from current meter records, SST images and hydrographic data. The HFF experimental box is 20 x 40 km, covering the upper half of the slope (i.e. covering from 250 m to 1250 m depth isobaths). Current meter and satellite data show that the site is embedded in a region of significant Northern Current meandering and eddy activity. From SST images, meander wavelengths are estimated larger than 60 km, embracing smaller structures. These flow patterns affect upper-layer waters down to at least 650 m depth. Current meter data distinguish two narrow energetic bands centred at 3.5 days and 7.5 days, respectively, in agreement with previous studies.
Baroclinic instability is viewed as a possible mechanism to explain the generation of the Northern Current meanders. The analytical model of Tang (1975) predicts the development of unstable waves of wavelength (> 60 km) and periods compatible with the 7.5 day band recorded with current meter devices. The higher frequency band of 3.5 days is out of the frequency range predicted by the classical baroclinic instability theory and it is discussed as a restriction of quasi-geostrophic theory.
Barotropic instability is studied using a laboratory model of a -westward' jet flowing over the lower half of the continental slope, which considers dynamic similarity with the Northern Current. The laboratory model is cross-validated with a corresponding numerical model. Jet instabilities of currents similar to the Northern Current (i.e. westward jets) occur at the edges of the jet, showing a clear meandering tendency over the mid-slope. Westward currents of Ro = 0.1 -- 0.2 develop instabilities of wavelengths (50 -- 75 km) similar to those observed from SST images, with periods (3.3 -- 3.8 days) compatible with the 3.5 days period band recorded with HFFE current meters.
The laboratory and numerical experiments have reproduced westward jets (as the Northern Current), but also eastward jets, in order to have a full approach to better understand the role of the bottom topography on barotropic instabilities. The slope current instabilities are successfully explained by the Marcus and Lee theory (1998) of jets on a beta plane. This theory is valid for westward flows with Ro > 0.1 and for eastward flows with Ro > 0.2 (jets of the so-called Regime II flows in this thesis), and it states that the instabilities of each shear layer of the barotropic jet take the appearance of a Kelvin-Helmholtz-like pattern, associated with a Rossby wave (of topographic origin in our case). According to this theory, the differences between eastward and westward jets rely on the disposition of the Rossby waves --at the centre of the current in eastward flows and at the edges of the jet in westward currents. Jets over a sloping bottom with small Rossby numbers (Ro < 0.1 for westward jets; Ro < 0.2 for eastward jets) show a flow pattern (the so-called Regime I in this thesis) that has common characteristics for eastward and westward flows. In these -small'-Ro flows, Kelvin-Helmholtz-like instabilities dominate, whereas Rossby waves are too weak to produce any major difference between jets flowing in eastward or westward direction. This occurs when the topographic influence, assumed proportional to the Ro number of the jet, is small.
The differences between eastward and westward slope currents observed in this work (and similar observations of jets on a beta-plane from previous works) are explained in this thesis by a simple scheme based on conservation of potential vorticity, considering there are two main components in balance: the shear-induced vorticity and the topographically induced vorticity. The signs of these two components are determined by the relative direction of the flow with respect to the inclination of the bottom topography. Once the critical Rossby number is overpassed so that the topographic effects are important (Ro > 0.1 for westward jets; Ro > 0.2 for eastward jets), conservation of potential vorticity tends to enhance vortices at the centre of eastward jets --eastward jets show meandering at the jet core. In westward jets, potential vorticity conservation is responsible of enhancing vortices at each edge of the jet. Thus, westward jets (as the Northern Current) are broad and meandering occurs at the jet edges.
In Ro > 0.1 westward flows (i.e. Regime II westward jets) a topographic Rossby wave appears over the shelf break. This result is likely observed because of the specific topography used in this work --a continental slope and a continental shelf separated by a shelf break, producing a strong change in ambient potential vorticity. Numerical simulations reveal that this Rossby wave is triggered by the slope current. This topographic Rossby wave is a robust pattern, since it is independent of the position of the current over the slope, the shape of the velocity shear profile of the jet, and the jet width. Although this type of wave could not be inferred from the HFFE field data, it could be a focus of study in further field experiments. It also needs further analytical consideration.
The general conclusion extracted from this thesis that tries to explain the mesoscale variability associated to the Northern Current is that both baroclinic and barotropic instability could explain part of the oceanic observations. As a consequence, mixed barotropic-baroclinic instability (which occurs at wavelengths which are between those corresponding to pure barotropic and pure baroclinic instability) is thought to play an important role on the observed mesoscale variability. The resulting wavelength would depend on the relative strength of both mechanisms.
CitationFlexas Sbert, M. del M. Mesoscale variability of the northern current in the gulf of lions and the role of bottom topography. Tesi doctoral, UPC, Departament d'Enginyeria Hidràulica, Marítima i Ambiental, 2003. ISBN 8468850888. Available at: <http://hdl.handle.net/2117/93698>
URIhttp://hdl.handle.net/2117/93698
DLB-6371-2004
ISBN8468850888
Other identifiershttp://www.tdx.cat/TDX-1216103-124531
Collections
Share: