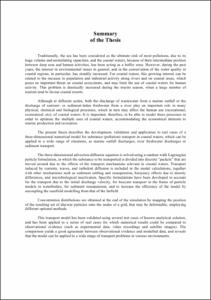 Traditionally, the sea has been considered as the ultimate sink of most pollutions, due to its huge volume and assimilating capacities, and the coastal waters, because of their intermediate position between deep seas and human activities, has been acting as a buffer zone. However, during the past years, the interest in environmental issues in general, and in the conservation of the water quality in coastal regions, in particular, has steadily increased. For coastal waters, this growing interest can be related to the increase in population and industrial activity along rivers and on coastal areas, which poses an important threat on coastal ecosystems, and may limit the use of coastal waters for human activity. This problem is drastically increased during the tourist season, when a large number of tourists tend to favour coastal resorts.

Although at different scales, both the discharge of wastewater from a marine outfall or the discharge of nutrient- or sediment-laden freshwater from a river play an important role in many physical, chemical and biological processes, which in turn may affect the human use (recreational, economical, etc), of coastal waters. It is important, therefore, to be able to model these processes in order to optimise the multiple uses of coastal waters, accommodating the economical interests to marine production and recreation.

The present thesis describes the development, validation and application to real cases of a three-dimensional numerical model for substance (pollution) transport in coastal waters, which can be applied to a wide range of situations, as marine outfall discharges, river freshwater discharges or sediment transport.

The three-dimensional advection-diffusion equation is solved using a random walk Lagrangian particle formulation, in which the substance to be transported is divided into discrete "packets" that are moved around due to the effects of the transport mechanisms relevant in coastal waters. Transport induced by currents, waves, and turbulent diffusion is included in the model calculations, together with other mechanisms such as sediment settling and resuspension, buoyancy effects due to density differences, and microbiological inactivation. Specific formulations have been developed to account for the transport due to the initial discharge velocity, for buoyant transport in the frame of particle models in waterbodies, for sediment resuspension, and to increase the efficiency of the model by uncoupling the nearfield modelling from that of the farfield.

Concentration distributions are obtained at the end of the simulation by mapping the position of the resulting set of discrete particles onto the nodes of a grid, that may be deformable, employing different optional methods.

This transport model has been validated using several test cases of known analytical solution, and has been applied to a series of real cases for which numerical results could be compared to observational evidence (such as experimental data, video recordings and satellite images). The comparison yields a good agreement between observational evidence and modelled data, and reveals that the model can be applied to a wide range of transport problems in various environments.
CitationMestres Ridge, M. "Three-dimensional simulation of pollutant dispersion in coastal waters". Tesi doctoral, UPC, Departament d'Enginyeria Hidràulica, Marítima i Ambiental, 2002. Available at: <http://hdl.handle.net/2117/93694>
URIhttp://hdl.handle.net/2117/93694
DLB-11568-2003
ISBN8468809438
Other identifiershttp://www.tdx.cat/TDX-1218102-135711