Development and validation of the thermal diagnostics instrumentation in lisa pathfinder 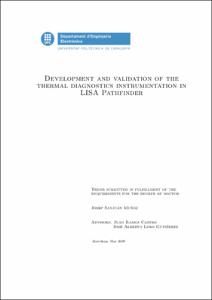 Non-inertial forces perturbing the TMs must be less than 6 fN/sqrt(Hz) in the frequency range of 0.1 mHz to 0.1 Hz and the noise in the measurement between the TMs (separated by 5 Gm) must be of 40 pm/sqrt(Hz) in the same band. To reduce the risks of a direct launch of LISA, ESA has decided to first launch LPF to put all the LISA technologies to test.
The payload of LPF, the LISA Technology Package (LTP), contains two TMs placed in two cylinders inside a single spacecraft (SC) and an interferometric system that measures the relative distance between them. The SC isolates the TMs from the external disturbances but internal stray forces will still perturb the TMs. Their levels must be bounded not to challenge the free fall accuracy. One of these disturbances is temperature fluctuations and the aspects related to their measurement are the leitmotif of this thesis.

In chapter 1 we have presented how temperature fluctuations couple into the key subsystems of the LTP to degrade their performance. The foreseen effects are radiation pressure, radiometer effect, temperature coefficient of optical components, etc. Onground estimations conclude that the temperature stability in the LTP must be less than 100 microK/sqrt(Hz) in the frequency range of 1 mHz to 30 mHz (LTP band). Since temperature fluctuations are an important issue in LPF and in LISA, a thermal diagnostic subsystem is needed aboard both missions.

The task of the thermal diagnostics in the LTP is twofold: on the one hand, temperature fluctuations in different subsystems must be measured with noise levels of 10 microK/sqrt(Hz) in the LTP band. On the other hand, a set of heaters will generate heat pulses that in conjunction with temperature measurements will be used to estimate the actual coupling between temperature and systems performance. These actions will provide information on the behaviour of the system and will permit to identify the fraction of noise in the system coming from temperature issues. The main function of LPF, as precursor mission of LISA, is the understanding of all the noise sources in the system. This will provide clues to the final leap from LPF sensitivity to LISA one.

The main investigations carried out during this thesis can be split into three main categories: (i) the design and validation of the LTP temperature measurement subsystem (TMS); (ii) the extension of the system to the LISA requirements; and (iii) the analysis of the in-flight thermal experiments in the LTP. The thesis is organised as follows: in chapter 2 we describe the designed electronics and the temperature sensors chosen. Aspects related to the coupling of the TMS with other subsystems nearby are discussed in chapter 3. Chapter 4 focuses on the design of the testbed needed for the validation of the TMS. Two different testbeds are described: one for the LTP measurement bandwidth (MBW) and another one for the LISA MBW, 0.1 mHz. In chapter 5 we present the results of the test campaigns: the prototype, the engineering model and the flight model systems were put to test. The results of the investigations in the LISA band are also shown. Chapter 6 contains investigations in view of LISA requirements to reduce excess noise at very low frequency and to reduce the floor noise of the measurement. Chapter 7 focuses on the thermal experiment on-board LPF: a set of thermal excitations are proposed to extract information of the thermal behaviour of the key subsystems of the LTP.
CitationSanjuán Muñoz, J. Development and validation of the thermal diagnostics instrumentation in lisa pathfinder. Tesi doctoral, UPC, Departament d'Enginyeria Electrònica, 2009. ISBN 9788469286784. Available at: <http://hdl.handle.net/2117/93678>
URIhttp://hdl.handle.net/2117/93678
DLB.3901-2010
ISBN9788469286784
Other identifiershttp://www.tdx.cat/TDX-1119109-114917
Collections
Share: