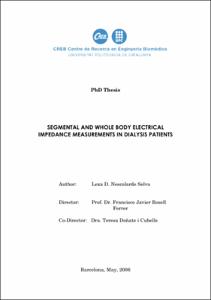 The main objective of this thesis is to contribute to the prevention and control of the cardiovascular risk, hydration state and nutritional state in dialysis patients using non-invasive electrical impedance measurements. The thesis is structured in three parts with the following objectives: 1) to establish electrical impedance reference data for healthy Cuban population, 2)to improve the diagnostic based on impedance methods in Cuban hemodialysis (HD)patients and 3) to develop the impedance methods for continuous ambulatory peritoneal dialysis patients (CAPD).
Healthy population: We analyzed the impedance vector distribution using the Bioimpedance Vector Analysis (BIVA) for the three more representative race-ethnicities in Cuba. We measured 1196 healthy adult (689 M, 507 W, 18-70 yr). The 95% confidence ellipses were drawn using specific BIVA software for mean vectors of different races. Due to the close distribution of mean vectors that we found for the three race-ethnicities, we concluded that only one set of sex-specific tolerance ellipses can be used for the Cuban population.
HD patients: The BIVA method was used in a sample of 74 HD patients in stable (without edema) and critical (hyper-hydrated and malnutrition) states in order to establish the relation between hyper-hydration and mortality. Stable group include 48 patients (28 M and 18 W), and critical group include 28 critical patients (16 M and 12 W). Student's t test and Hotelling's T2 test were used to analyse the separation of groups obtained by means of clinical diagnosis and those obtained by BIVA. A statistically significant difference was obtained (P < 0.05) in R/H, Xc/H and phase angle, PA. Critical patients (hyper-hydrated and malnutrition) were located below the inferior pole of the 75% tolerance ellipse, with PA lower than 4º. In conclusion, the BIVA method could be used to detect hyper-hydration state before edema appears, and to predict survival through PA. Advantages of the method are its simplicity, objectivity and that it does not require the definition of a patient dry weight.
CAPD patients: Segmental impedance measurements were obtained using 9 configurations (7 longitudinal and 2 transversal) in 25 CAPD male patients.
In a first study we analyzed Z, Z/H and ZBMI indexes. 23 male patients were classified according to the hydration state as normo-hydrated, group 0 (10 M) or hyper-hydrated, group 1 (13 M). Wilcoxon test was used to analyze the change in impedance produced by a PD session. Mann-Whitney U test was used to analyse the separation between groups obtained by means of clinical diagnosis and those obtained by Z, Z/H or ZBMI. Spearman correlation was used to study the correlation between impedance vectors in each segment and clinical assessment. Statistical significance was set at P < 0.05. Results show that ZBMI gives information about the specific resistivity of tissues and not about fluid and fat mass changes. BIVA separate hyper-hydrated and normo-hydrated patients. Transversal measurements in the leg region and longitudinal in the thorax region are useful to corroborate the hydration and nutritional state in CAPD patients.
In a second study a new classification was performed. Group 0 has normo-hydrated patients (10 M) and group 1 includes patients (15 M) with varying degrees of hypertension, overhydration and high score on cardiovascular risk factors. Mann-Whitney U-test was used to compare the differences in clinical measurements, laboratory test, and bioimpedance measurements between groups. The Mahalanobis Distance (dM2) was calculated using a bidimensional space, using the resistance measurement, right-side (RRS/H) or thorax segment (RTH/H) and the BPmean. Hotelling's T2 test was used to analyzed difference between groups through (RTH/H, BPmean) and (RRS/H, BPmean) vectors. A statistically significant difference was obtained (P < 0.05) in both vectors. Group 1 showed a small dM2 with respect to a reference patient (a critical patient with acute lung oedema) with high BPmean and low values of RTH/H and RRS/H. Moreover, Group 0 showed a larger dM2 with respect to the reference patient with lower BPmean and higher values of RTH/H and RRS/H. All patients classified as hyper-hydrated leading to hypertension by clinical assessment were correctly classified using dM2(RTH/H, BPmean). We conclude that segmental bioimpedance of the thoracic region could be a simple, objective, non-invasive method of support to facilitate the clinical assessment in CAPD.