Sequence Stratigraphy as a tool for water resources management in alluvial coastal aquifers: application to the Llobregat delta (Barcelona, Spain) 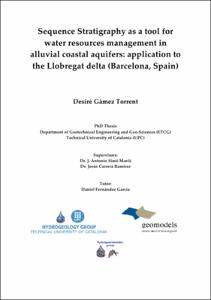 Chair / Department / Institute
Universitat Politècnica de Catalunya. Departament d'Enginyeria del Terreny, Cartogràfica i Geofísica
Document typeDoctoral thesis
PublisherUniversitat Politècnica de Catalunya
Rights accessOpen Access
All rights reserved. This work is protected by the corresponding intellectual and industrial property rights. Without prejudice to any existing legal exemptions, reproduction, distribution, public communication or transformation of this work are prohibited without permission of the copyright holder
Abstract
Most coastal aquifers undergo seawater intrusion. Mitigating this risk depends on a sound knowledge of flow mechanisms, well located and constructed wells, an effective management, suitable policies and the desire to conserve the aquifer. To this end, a comprehensive geological model is essential. The single most important question that the geological model should address is the degree and nature of the connection of the aquifer to the sea. Differences in the connection explain why apparently similar coastal aquifers display very different salinitzation behavior. Some aquifers salinize with moderate pumping (eg. Tordera and Llobregat deltas) whereas others sustain large extractions with lower vulnerability to seawater intrusion (eg. Ter delta). However, the characterization of such a connection is not easy given the lack of onshore-offshore geological mapping potential pathways for seawater contamination.
This thesis is focused on sequence stratigraphy, which is necessary to understand the onshore-offshore aquifer connection, thus modifying the classical hydrogeological conceptual models. The methodology of sequence stratigraphy offers a perspective of delta architecture based on geological controls and processes. Sequence stratigraphic concepts are used in Western Mediterranean deltas in addition to local factors, such as subsidence, uplift and the rate of sediment supply to account for differences in Pleistocene stratigraphic patterns and aquifer preservation. These local factors exert an influence over the shape, slope and thickness of aquifers. Together with the width of the continental shelf, the presence of submarine canyons, faults and thin prodelta layers conditions vulnerability to seawater intrusion.
The Quaternary Mediterranean shelf is characterized by high-frequency depositional sequences mainly composed of large-scale regressive wedges with poor or poorly preserved transgressive to highstand intervals. Although the Llobregat delta is an anomaly, it serves as a paradigm of deltaic architecture because of its well preserved transgressive and highstand intervals. The well preserved coarse transgressive deposits are important from hydrogeological point of view. They act as aquifers with high lateral continuity from onshore to offshore providing paths for seawater intrusion.
The excellent preservation in the Llobregat delta may be a consequence of Quaternary growth faults, which caused high accommodation space, limiting the action of wave and storm events. The identification of different seismic units and deformation features along the coast makes it possible to distinguish two main morpho-structural sectors. These sectors can be influenced by tectonic movements, which may be intensified by sediment supply changes.
Detailed sedimentological, age and paleontological (foraminifera and ostracods) data display a cyclic vertical pattern of facies, including a high degree of reworked sediments. Available ages together with high sediment preservation due to constant subsidence and sediment supply during sea level rises allow us to establish a chronostratigraphic framework. The most significant and widespread erosion were interpreted as occurring during gradual sea-level falls with a frequency of 100 Kyr. glacial-interglacial cycles. However, most of the regressive deposits display complex internal architectures, which suggest the imprint of higher-frequency cycles.
The stacking pattern of the modern Holocene delta is controlled by changes in the relative sea-level and in the sediment supply. Paleofloods frequencies controlled by climatic changes and intensified by anthropic activity caused an important progradational pulses in the Llobregat delta and the channel switching with the rapid abandonment of the delta lobes.
CitationGámez Torrent, D. Sequence Stratigraphy as a tool for water resources management in alluvial coastal aquifers: application to the Llobregat delta (Barcelona, Spain). Tesi doctoral, UPC, Departament d'Enginyeria del Terreny, Cartogràfica i Geofísica, 2007. ISBN 9788469170229. Available at: <http://hdl.handle.net/2117/93567>
URIhttp://hdl.handle.net/2117/93567
DLB.49786-2008
ISBN9788469170229
Other identifiershttp://www.tdx.cat/TDX-0523108-093948
Collections
Share: