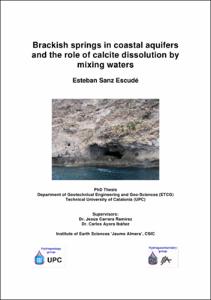 Brackish springs are relatively frequent phenomena in coastal carbonate formations and their existence has been extensively reported in Mediterranean coasts. In fact, more than 300 brackish springs have been identified only in the coast of the former Yugoslavia. They essentially consist of inland or submarine karst outlets discharging waters with flow-dependent salinity. The phenomenon is particularly surprising in inland springs, where high flow rates with significant salinities (presumably coming from the sea) may be discharged several meters above sea level. In addition to its scientific interest, brackish springs hold a strategic potential as a source of water in areas with often limited water resources. In order to design their appropriate management a quantitative understanding of their controlling mechanisms both in general and at every particular spring has to be achieved.
These mechanisms have been studied for many years but some controversy still remains. It is clear that they are related to deep well developed karst systems. Under these conditions, groundwater flows in a turbulent mode through a network of interconnected conduits immersed in a porous matrix with slow Darcyan flow velocities. Surprisingly, different models to explain the functioning of the system, although based on different conceptual and methodological approaches lead to similar results. This sugests that a global study on the salinitzation mechanisms of brackish springs should be undertaken. Here, we first derive the equations governing turbulent flow for density-dependent fluids and describe different mechanisms of salinization of inland brackish springs, in order to compare with the spring discharge and concentration response for those mechanisms of salinization.
The insights gained in this analysis are applied to the study of S'Almadrava spring (Mallorca, Spain). This spring discharges up to 2 m3/s with salinities of 20 mS/cm at an elevation of 8 m.a.s.l. It generally displays an inverse relation between discharge rate and concentration (i.e., discharging higher salinity waters for low flow rates, and vice versa). A hypothetical but geologically feasible dual permeability model is proposed to reproduce observed salinity variations for both the dry and wet seasons but also to explain the secondary salinity peaks observed after every rainfall event. Model results agree with observations, but the lack of geological information at depth impedes model validation. Therefore, a second validation of the conceptual model is undertaken based on high-frequency geochemical observations. Due to the highly dynamic conditions of the system, the geochemical data was analyzed using fully coupled reactive transport modelling. The interpretation of geochemical data not only helps on validating conceptual models but also yields information on the water-rock interaction processes occurring at deep carbonate systems. In fact, one of the processes initially proposed to explain the occurrence of well-developed karst systems at depth, is the enlargement of tectonic fissures by carbonate dissolution due to the mixing of fresh and seawater.
The theory of dissolution by mixing waters is based on the fact that when two solutions are mixed, concentrations in the mixture are volume weighted averages of the two end-members, but the thermodynamic activities of the species controlling the water-mineral reactions are non linear functions of the mixing ratio. Therefore, two end-member solutions in equilibrium with a solid phase could lead to an undersaturated mixture depending on several factors, most notably CO2 content and ionic strength. Observation of mixing and carbonate dissolution at depth has not been possible because of technical difficulties. More accessible to observation is the seawater mixing zone in coastal aquifers where calcite undersaturation and/or calcite dissolution have been reported numerous times. Yet, dissolution in coastal environments is not always clear and oversaturation or lack of dissolution in mixing zones have also been described. This apparent inconsistency on field observations around the world prompted the studies of the second part of the thesis. Flow-through laboratory experiments were performed in CO2-controlled atmosphere in order to quantify the dependence of the dissolution of calcite with the mixing ratio, and the role that CO2 variations may have on enhancing the dissolution capacity of the mixture. Results show that, although dissolution occurs, the major carbonate dissolution in aquifers must be considered only in a geological time scale. Sanford and Konikow (1989) predicted the location and magnitude of long term porosity development of coastal aquifers, based on a two step method. We compare their results with a reactive transport model approach in 1D and 2D, showing that reactive transport is required to properly understand the phenomenon because it is found that dissolution is controlled not only by geochemical factors but also by the rate at which fresh and salt water mix (i.e., by dispersion).
CitationSanz Escudé, E. "Brackish springs in coastal aquifers and the role of calcite dissolution by mixing waters". Tesi doctoral, UPC, Departament d'Enginyeria del Terreny, Cartogràfica i Geofísica, 2007. Available at: <http://hdl.handle.net/2117/93563>
URIhttp://hdl.handle.net/2117/93563
DLB.26675-2008
ISBN9788469124864
Other identifiershttp://www.tdx.cat/TDX-0122108-105826