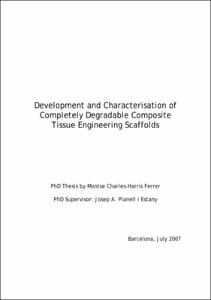 Chair / Department / Institute
Universitat Politècnica de Catalunya. Departament de Ciència dels Materials i Enginyeria Metal·lúrgica
Document typeDoctoral thesis
PublisherUniversitat Politècnica de Catalunya
Rights accessOpen Access
Abstract
The field of Tissue Engineering has developed in response to the shortcomings associated to the replacement of tissues lost to disease or trauma: donor tissue rejection, chronic inflammation, and donor tissue shortages. The driving force behind Tissue Engineering is to avoid these problems by creating biological substitutes capable of replacing the damaged tissue. This is done by combining scaffolds, cells and signals in order to create living, physiological, three-dimensional tissues.
Scaffolds are porous biodegradable structures that are meant to be colonised by cells and degrade in time with tissue generation. Scaffold design and development is mainly an engineering challenge, and is the goal of this PhD thesis.
The main aim of this thesis is to develop and characterise scaffolds for Tissue Engineering applications. Specifically, its objectives are:
1. To study, optimise and characterise two scaffold processing methods: Solvent Casting and Phase Separation. This is done by experiment design analysis.
2. To characterise the degradation, surface properties, and cellular behaviour of the scaffolds produced.
The scaffolds are made of a composite of polylactic acid polymer and a calcium phosphate soluble glass. The comparison of the two processing methods reveals that in general, the solvent cast scaffolds have higher porosities and lower mechanical properties than the phase-separated ones. Two compositions containing 20 weight % and 50 weight % of glass particles were chosen for further characterisations including degradation, surface properties and cellular behaviour.
The degradation of the scaffolds was studied for a period of 10 weeks. The evolution of various parameters such as: morphology, weight loss, mechanical properties, thermal transitions and porosity, was monitored. Scaffolds produced via solvent casting were found to be more severely affected by degradation than phase-separated ones.
The surface properties of the scaffolds were measured by modelling the scaffold pore walls as thin composite films. The morphology, topography, surface energy and protein adsorption of the films was characterised thoroughly. Again, the processing method was critical in determining scaffold properties. Films made via phase-separation processing had markedly different properties due to extensive coating of the glass particles by the polymer. This made the surfaces rougher and more hydrophobic. When the glass particles are not completely coated with polymer, they increase the material's hydrophilic and protein adsorption properties, thus confirming the potential biological benefits of the inclusion of the calcium phosphate glass.
The biological behaviour of the scaffolds was characterised by means of in vitro cell cultures with primary osteoblast stem cells and cells from a stable cell line, under static and dynamic conditions. Their morphology, proliferation and differentiation were monitored. Both types of scaffolds sustained osteblastic cell growth. The solvent cast scaffolds were easily colonised by cells which migrated throughout their structure. The cells on the phase-separated scaffolds, however, tended to form thick layers on the scaffold surface.
Finally, an alternative characterisation technique was explored applying Synchrotron X-Ray Microtomography and in-situ micromechanical testing. These experiments allowed for the qualitative and quantitative analysis of the microstructure of the scaffolds both at rest and under strain. A finite element model of the solvent cast scaffolds was developed and a preliminary analysis was performed. This technique could be used to complement and overcome some of the limitations of traditional mechanical characterisation of these highly porous materials.
CitationCharles-Harris Ferrer, M. Development and Characterisation of Completely Degradable Composite Tissue Engineering Scaffolds. Tesi doctoral, UPC, Departament de Ciència dels Materials i Enginyeria Metal·lúrgica, 2007. ISBN 9788469103852. Available at: <http://hdl.handle.net/2117/93368>
URIhttp://hdl.handle.net/2117/93368
DLB.8573-2008
ISBN9788469103852
Other identifiershttp://www.tdx.cat/TDX-1122107-093148
Collections
Share: