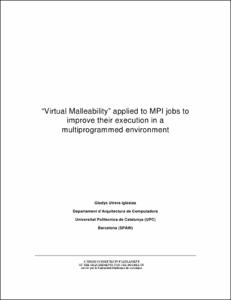 ; Corabalán González, Julita
Chair / Department / Institute
Universitat Politècnica de Catalunya. Departament d'Arquitectura de Computadors
Document typeDoctoral thesis
PublisherUniversitat Politècnica de Catalunya
Rights accessOpen Access
Abstract
This work focuses on scheduling of MPI jobs when executing in shared-memory multiprocessors (SMPs).
The objective was to obtain the best performance in response time in multiprogrammed multiprocessors systems using batch systems, assuming all the jobs have the same priority.
To achieve that purpose, the benefits of supporting malleability on MPI jobs to reduce fragmentation and consequently improve the performance of the system were studied.
The contributions made in this work can be summarized as follows:
· Virtual malleability: A mechanism where a job is assigned a dynamic processor partition, where the number of processes is greater than the number of processors. The partition size is modified at runtime, according to external requirements such as the load of the system, by varying the multiprogramming level, making the job contend for resources with itself.
In addition to this, a mechanism which decides at runtime if applying local or global process queues to an application depending on the load balancing between processes of it.
· A job scheduling policy, that takes decisions such as how many processes to start with and the maximum multiprogramming degree based on the type and number of applications running and queued. Moreover, as soon as a job finishes execution and where there are queued jobs, this algorithm analyzes whether it is better to start execution of another job immediately or just wait until there are more resources available.
· A new alternative to backfilling strategies for the problema of window execution time expiring. Virtual malleability is applied to the backfilled job, reducing its partition size but without aborting or suspending it as in traditional backfilling.

The evaluation of this thesis has been done using a practical approach. All the proposals were implemented, modifying the three scheduling levels: queuing system, processor scheduler and runtime library.
The impact of the contributions were studied under several types of workloads, varying machine utilization, communication and, balance degree of the applications, multiprogramming level, and job size.
Results showed that it is possible to offer malleability over MPI jobs.
An application obtained better performance when contending for the resources with itself than with other applications, especially in workloads with high machine utilization. Load imbalance was taken into account obtaining better performance if applying the right queue type to each application independently.
The job scheduling policy proposed exploited virtual malleability by choosing at the beginning of execution some parameters like the number of processes and maximum multiprogramming level. It performed well under bursty workloads with low to medium machine utilizations.
However as the load increases, virtual malleability was not enough. That is because, when the machine is heavily loaded, the jobs, once shrunk are not able to expand, so they must be executed all the time with a partition smaller than the job size, thus degrading performance. Thus, at this point the job scheduling policy concentrated just in moldability.
Fragmentation was alleviated also by applying backfilling techniques to the job scheduling algorithm. Virtual malleability showed to be an interesting improvement in the window expiring problem. Backfilled jobs even on a smaller partition, can continue execution reducing memory swapping generated by aborts/suspensions In this way the queueing system is prevented from reinserting the backfilled job in the queue and re-executing it in the future.
CitationUtrera Iglesias, G.M. «Virtual malleability» applied to MPI jobs to improve their execution in a multiprogrammed environment". Tesi doctoral, UPC, Departament d'Arquitectura de Computadors, 2007. ISBN 9788469318041. Available at: <http://hdl.handle.net/2117/93327>
URIhttp://hdl.handle.net/2117/93327
DLB.22539-2010
ISBN9788469318041
Other identifiershttp://www.tdx.cat/TDX-0301110-131748
Collections
Share: