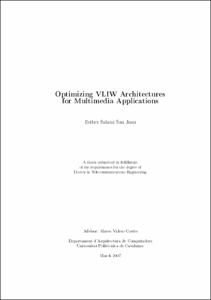 The growing interest that multimedia processing has experimented during the last decade is motivating processor designers to reconsider which execution paradigms are the most appropriate for general-purpose processors. On the other hand, as the size of transistors decreases, power dissipation has become a relevant limitation to increases in the frequency of operation. Thus, the efficient exploitation of the different sources of parallelism is a key point to investigate in order to sustain the performance improvement rate of processors and face the growing requirements of future multimedia applications. We belief that a promising option arises from the combination of the Very Long Instruction Word (VLIW) and the vector processing paradigms together with other ways of exploiting coarser grain parallelism, such as Chip MultiProcessing (CMP).

As part of this thesis, we analyze the problem of memory disambiguation in multimedia applications, as it represents a serious restriction for exploiting Instruction Level Parallelism (ILP) in VLIW architectures. We state that the real handicap for memory disambiguation in multimedia is the extensive use of pointers and indirect references usually found in those codes, together with the limited static information available to the compiler on certain occasions. Based on the observation that the input and output multimedia streams are commonly disjointed memory regions, we propose and implement a memory disambiguation technique that dynamically analyzes the region domain of every load and store before entering a loop, evaluates whether or not the full loop is disambiguated and executes the corresponding loop version. This mechanism does not require any additional hardware or instructions and has negligible effects over compilation time and code size. The performance achieved is comparable to that of advanced interprocedural pointer analysis techniques, with considerably less software complexity. We also demonstrate that both techniques can be combined to improve performance.

In order to deal with the inherent Data Level Parallelism (DLP) of multimedia kernels without disrupting the existing core designs, major processor manufacturers have chosen to include MMX-like µSIMD extensions. By analyzing the scalability of the DLP and non-DLP regions of code separately in VLIW processors with µSIMD extensions, we observe that the performance of the overall application is dominated by the performance of the non-DLP regions, which in fact exhibit only modest amounts of ILP. As a result, the performance achieved by very wide issue configurations does not compensate for the related cost. To exploit the DLP of the vector regions in a more efficient way, we propose enhancing the µSIMD -VLIW core with conventional vector processing capabilities. The combination of conventional and sub-word level vector processing results in a 2-dimensional extension that combines the best of each one, including a reduction in the number of operations, lower fetch bandwidth requirements, simplicity of the control unit, power efficiency, scalability, and support for multimedia specific features such as saturation or reduction. This enhancement has a minimal impact on the VLIW core and reaches more parallelism than wider issue µSIMD implementations at a lower cost. Similar proposals have been successfully evaluated for superscalar cores. In this thesis, we demonstrate that 2-dimensional Vector-µSIMD extensions are also effective with static scheduling, allowing for high-performance cost-effective implementations.
CitationSalamí San Juan, E. "Optimizing VLIW architectures for multimedia applications". Tesi doctoral, UPC, Departament d'Arquitectura de Computadors, 2007. Available at: <http://hdl.handle.net/2117/93316>
URIhttp://hdl.handle.net/2117/93316
DLB.31930-2008
ISBN9788469139622
Other identifiershttp://www.tdx.cat/TDX-0416108-105629