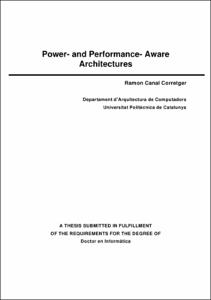 The scaling of silicon technology has been ongoing for over forty years. We are on the way to commercializing devices having a minimum feature size of one-tenth of a micron. The push for miniaturization comes from the demand for higher functionality and higher performance at a lower cost. As a result, successively higher levels of integration have been driving up the power consumption of chips. Today, heat removal and power distribution are at the forefront of the problems faced by chip designers.
In recent years portability has become important. Historically, portable applications were characterized by low throughput requirements such as for a wristwatch. This is no longer true.
Among the new portable applications are hand-held multimedia terminals with video display and capture, audio reproduction and capture, voice recognition, and handwriting recognition capabilities. These capabilities call for a tremendous amount of computational capacity. This computational capacity has to be realized with very low power requirements in order for the battery to have a satisfactory life span. This thesis is an attempt to provide microarchitecture and compiler techniques for low-power chips with high-computational capacity.
The first part of this work presents some schemes for reducing the complexity of the issue logic. The issue logic has become one of the main sources of energy consumption in recent years. The inherent associative look-up and the size of the structures (crucial for exploiting ILP), have led the issue logic to a significant energy budget. The techniques presented in this work eliminate or reduce the associative logic by determining producer-consumer relationships between the instructions or by scheduling the instructions according to the latency of the operations.
An important effort has been deployed to reduce the energy requirements and the power dissipation through novel mechanisms based on value compression. As a result, the second part of this thesis introduces several ultra-low power and high-end processor designs. First, the design space for ultra-low power processors is explored. Several designs are developed (at the architectural level) from scratch that exploit value compression at all levels of the data-path.
Second, value compression for high-performance processors is proposed and evaluated. At the end of this thesis, two compile-time techniques are presented that show how the compiler can help in reducing the energy consumption. By means of a static analysis of the program code or through profiling, the compiler is able to know the size of the operands involved in the computation. Through these analyses, the compiler is able to use narrower operations (i.e. a 64-bit addition can be converted to an 8-bit addition due to the information of the size of the operands).
Overall, this thesis compromises the detailed study of one of the most power hungry units in a processor (the issue logic) and the use of value compression (through hardware and software) as a mean to reduce the energy consumption in all the stages of the pipeline.
CitationCanal Corretger, R. "Power- and Performance - Aware Architectures". Tesi doctoral, UPC, Departament d'Arquitectura de Computadors, 2004. Available at: <http://hdl.handle.net/2117/93299>
URIhttp://hdl.handle.net/2117/93299
DLB-21944-2005
ISBN8468917397
Other identifiershttp://www.tdx.cat/TDX-0317105-172705