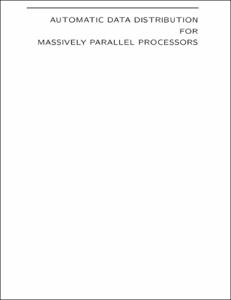 Chair / Department / Institute
Universitat Politècnica de Catalunya. Departament d'Arquitectura de Computadors
Document typeDoctoral thesis
PublisherUniversitat Politècnica de Catalunya
Rights accessOpen Access
All rights reserved. This work is protected by the corresponding intellectual and industrial property rights. Without prejudice to any existing legal exemptions, reproduction, distribution, public communication or transformation of this work are prohibited without permission of the copyright holder
Abstract
Massively Parallel Processor systems provide the required computational power to solve most large scale High Performance Computing applications. Machines with physically distributed memory allow a cost-effective way to achieve this performance, however, these systems are very diffcult to program and tune. In a distributed-memory organization each processor has direct access to its local memory, and indirect access to the remote memories of other processors. But the cost of accessing a local memory location can be more than one order of magnitude faster than accessing a remote memory location. In these systems, the choice of a good data distribution strategy can dramatically improve performance, although different parts of the data distribution problem have been proved to be NP-complete.
The selection of an optimal data placement depends on the program structure, the program's data sizes, the compiler capabilities, and some characteristics of the target machine. In addition, there is often a trade-off between minimizing interprocessor data movement and load balancing on processors. Automatic data distribution tools can assist the programmer in the selection of a good data layout strategy. These use to be source-to-source tools which annotate the original program with data distribution directives.
Crucial aspects such as data movement, parallelism, and load balance have to be taken into consideration in a unified way to efficiently solve the data distribution problem.
In this thesis a framework for automatic data distribution is presented, in the context of a parallelizing environment for massive parallel processor (MPP) systems. The applications considered for parallelization are usually regular problems, in which data structures are dense arrays. The data mapping strategy generated is optimal for a given problem size and target MPP architecture, according to our current cost and compilation model.
A single data structure, named Communication-Parallelism Graph (CPG), that holds symbolic information related to data movement and parallelism inherent in the whole program, is the core of our approach. This data structure allows the estimation of the data movement and parallelism effects of any data distribution strategy supported by our model. Assuming that some program characteristics have been obtained by profiling and that some specific target machine features have been provided, the symbolic information included in the CPG can be replaced by constant values expressed in seconds representing data movement time overhead and saving time due to parallelization. The CPG is then used to model a minimal path problem which is solved by a general purpose linear 0-1 integer programming solver. Linear programming techniques guarantees that the solution provided is optimal, and it is highly effcient to solve this kind of problems.
The data mapping capabilities provided by the tool includes alignment of the arrays, one or two-dimensional distribution with BLOCK or CYCLIC fashion, a set of remapping actions to be performed between phases if profitable, plus the parallelization strategy associated.
The effects of control flow statements between phases are taken into account in order to improve the accuracy of the model. The novelty of the approach resides in handling all stages of the data distribution problem, that traditionally have been treated in several independent phases, in a single step, and providing an optimal solution according to our model.
CitationGarcía Almiñana, J. Automatic data distribution for massively parallel processors. Tesi doctoral, UPC, Departament d'Arquitectura de Computadors, 1997. ISBN 8468909629. Available at: <http://hdl.handle.net/2117/93296>
URIhttp://hdl.handle.net/2117/93296
DLB.15683-2005
ISBN8468909629
Other identifiershttp://www.tdx.cat/TDX-0207105-110918
Collections
Share: