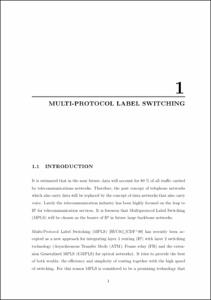 Multiprotocol Label Switching (MPLS) fuses the intelligence of routing with the performance of switching and provides significant benefits to networks with a pure IP architecture as well as those with IP and ATM or a mix of ther Layer 2 technologies. MPLS technology is key to scalable virtual private networks (VPNs) and end-to-end quality of service (QoS), enabling efficient utilization of existing networks to meet future growth. The technology also helps to deliver highly scalable, differentiated end-to-end IP services with simpler configuration, management, and provisioning for both Internet providers and end-users. However, MPLS is a connection-oriented architecture. In case of failure MPLS first has to establish a new label switched path (LSP) and then forward the packets to the newly established LSP. For this reason MPLS has a slow restoration response to a link or node failure on the LSP.
The thesis provides a description of MPLS-based architecture as a preferred technology for integrating ATM and IP technologies, followed by a discussion of the motivation for the fast and reliable restoration mechanism in an MPLS network. In this thesis first we address the fast rerouting mechanisms for MPLS networks and then we focus on the problem of packet loss, packet reordering and packet delay for protected LSP in MPLS-based network for a single node/link failure. In order to deliver true service assurance for guaranteed traffic on a protected LSP we use the fast rerouting mechanism with a preplanned alternative LSP. We propose enhancements to current proposals described in extant literature. Our fast rerouting mechanism avoids packet disorder and significantly reduces packet delay during the restoration period.
An extension of the Fast Rerouting proposal, called Reliable and Fast Rerouting (RFR), provides some preventive actions for the protected LSP against packet loss during a failure. RFR maintains the same advantages of Fast Rerouting while eliminating packet losses, including those packet losses due to link or node failure (circulating on the failed links), which were considered to be "inevitable" up to now.
For the purpose of validating and evaluating the behavior of these proposals a simulation tool was developed. It is based on the NS, a well-known network simulator that is being used extensively in research work. An extension featuring the basic functionality of MPLS (MNS) is also available for the NS, and this is the basis of the developed simulation tool.
Simulation results allow the comparison of Fast Rerouting and RFR with previous rerouting proposals.
In addition to this we propose a mechanism for multiple failure recovery in an LSP. This proposal combines the path protection, segment protection and local repair methods. In addition to the multiple link/node failure protection, the multiple fault tolerance proposal provides a significant reduction of delay that the rerouted traffic can experience after a link failure, because the repair action is taken close to the point of failure.
Then we proceed to address an inherent problem of the preplanned alternative LSP. As alternative LSPs are established together with the protected LSP it may happen that the alternative is not the optimal LSP at the time the failure occurs. To overcome this undesired behavior, we propose the Optimal and Guaranteed Alternative Path (OGAP). The proposal uses a hybrid of fast-rerouting and a dynamic approach to establish the optimal alternative LSP while rerouting the affected traffic using the preplanned alternative LSP. This hybrid approach provides the best of the fast rerouting and the dynamic approaches.
At the same time we observed that the protection path becomes in fact unprotected from additional failures after the traffic is rerouted onto it.
To address this we propose a guarantee mechanism for protection of the new protected LSP carrying the affected traffic, by establishing an alternative LSP for the rerouted traffic after a failure, avoiding the vulnerability problem for the protected traffic.
Finally, we present a further optimization mechanism, adaptive LSP, to enhance the existing traffic engineering for Quality of Services (QoS)provision and improve network resource utilization. The adaptive LSP proposal allows more flexibility in network resource allocation and utilization by adapting the LSP to variations in all network loads,resulting in an enhancement of existing MPLS traffic engineering.
CitationHundessa Gonfa, L. "Enhanced Fast Rerouting Mechanisms for Protected Traffic in MPLS Networks". Tesi doctoral, UPC, Departament d'Arquitectura de Computadors, 2003. Available at: <http://hdl.handle.net/2117/93292>
URIhttp://hdl.handle.net/2117/93292
DLB-23970-2004
ISBN8468864390
Other identifiershttp://www.tdx.cat/TDX-0323104-125205