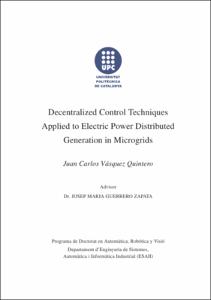 The most recent research projects show the technical difficulty of controlling the operation of microgrids, because they are complex systems in which several subsystems interact: energy sources, power electronic converters, energy storage systems, local, linear and non-linear loads and of course, the main grid. In next years, the electric grid will evolve from the current very centralized model toward a more distributed one. At the present time the generation, consumption and storage points are very far away one from each other. Under these circumstances, relatively frequent failures of the electric supply and important losses take place in the transport and distribution of energy, so that it can be stated that the efficiency of the supply system is low.

In another context, electric companies are aiming at an electric grid, formed in a certain proportion by distributed generators, where the consumption points are near the generation points, avoiding high losses in the transmission lines and reducing the rate of shortcomings. Summing up, it is pursued the generation of small quantities of electric power by the users (this concept is called microgeneration in the origin), considering them not only as electric power consumers but also as responsible for the generation, becoming this way an integral part of the grid.

In this context it is necessary to develop a new concept of flexible grid, i.e., with reconfiguration capability for operation with or without connection to the mains. The future microgrids should incorporate supervision and control systems that allow the efficient management of various kinds of energy generators, such as photovoltaic panels, energy storage systems, and local loads. Hence, we are dealing with intelligent flexible Microgrids capable of import and export power from/to the grid reconfiguring its operation modes and making decisions in real time.

The researching lineas that have been introduced in this thesis are focused on the innovation in this kind of systems, the integration of several renewable energy sources, the quality of the power supply, security issues, and the system behavior during faults.
In order to carry out some solutions related within these characteristics, the main goal of this thesis is the application on new control stretegies and a power management analysis of a microgrid. Thus, thanks to the emerging of renewable energy, is possible to give an alternative to the decoupling of generation units connected to the utility grid.

Likewise, a work methodology has been analyzed and developed based on the modeling, control parameters design, and power management control starting from a single voltage source inverter to a number of interconnected DG units forming flexible Microgrids. In addition, all the mencioned topics have been studied giving new system performances, viability and safe functioning, thanks to the small-signal analysis and introducing control loop design algorithms, improving the import/export of electric power and operating both grid connected mode and an island.

This thesis has presented an analysis, simulation and experimental results focusing on modeling, control, and analysis of DG units, giving contributions according to the following steps:

- Control-oriented modeling based on active and reactive power analysis
- Control synthesis based on enhanced droop control technique.
- Small-signal stability study to give guidelines for properly adjusting the control system parameters according to the desired dynamic response

This methodology has been extended to microgrids by using hierarchical control applied to droop-controlled line interactive UPSs showing that:

- Droop-controlled inverters can be used in islanded microgrids.
- By using multilevel control systems the microgrid can operate in both grid-connected and islanded mode, in a concept called flexible microgrid.

- Primary control is based on the droop method allowing the connection of different AC sources without any intercommunication.
- Secondary control avoids the voltage and frequency deviation produced by the primary control. Only low bandwidth communications are needed to perform this control level. A synchronization loop can be added in this level to transfer from islanding to grid connected modes.
- Tertiary control allows the import/export of active and reactive power to the grid.
CitationVásquez Quintero, J.C. Decentralized control techniques applied to electric power distributed generation in microgrids. Tesi doctoral, UPC, Institut d'Organització i Control de Sistemes Industrials, 2009. ISBN 9788469298442. Available at: <http://hdl.handle.net/2117/93271>
URIhttp://hdl.handle.net/2117/93271
DLB.10143-2010
ISBN9788469298442
Other identifiershttp://www.tdx.cat/TDX-0122110-174048
Collections
Share: