Fine-motion planning for robotic assembly under modelling and sensing uncertainties 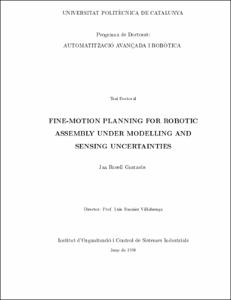 Chair / Department / Institute
Universitat Politècnica de Catalunya. Institut d'Organització i Control de Sistemes Industrials
Document typeDoctoral thesis
PublisherUniversitat Politècnica de Catalunya
Rights accessOpen Access
Abstract
This thesis proposes a fine-motion planner for assembly tasks in the plane considering two degrees of freedom of translation and one of rotation, taking into account modelling and sensing uncertainties and the effect of friction.
The proposed planner is based on a two-phase approach. First, uncertainty is not considered and a nominal solution path is searched in a graph representing the free configuration space, which has been obtained with an exact cell decomposition method. Then, uncertainty is considered and the arcs of the solution path are evaluated in order that the possible contacts occurring during the traversing of the arc do not provoke a failure of the task execution. When this is not possible, the planner finds a patch plan in contact-space in an analogous way as the nominal solution path in free-space.
This work:
- introduces the parametrized translational configuration space, which is an embedding of the rotational degree of freedom into the translational configuration space, for the analysis of the geometric constraints of planar assembly tasks.
- makes a thorough analysis of the sources of uncertainty that affect an assembly task. Modelling and sensing uncertainties have been considered. Although modelling uncertainty is an important source of uncertainty that affects assembly tasks, it has usually been overlooked by most of the researchers. In this work, this source of uncertainty has been meticulously studied, by analyzing the effects of both positioning uncertainty and manufacturing tolerances. The dependence between sources of uncertainty is also taken into account.
- includes a force analysis using the dual representation of forces, which allows to consider in an easy way both the geometric uncertainties that affect the possible raction forces arising at the contact situations, as well as the sensor uncertainties. Friction has been considered and modelled with the generalized friction cone. The suitability of this model for this kind of tasks has been validated from the experiments.
- synthesizes the robot motions using a force-compliant control based on the generalized damping model. Task execution includes uncertainty reduction routines in order to adapt the robot commands to the actual geometry of the task.
CitationRosell Gratacòs, J. Fine-motion planning for robotic assembly under modelling and sensing uncertainties. Tesi doctoral, UPC, Institut d'Organització i Control de Sistemes Industrials, 1998. ISBN 8469968858. Available at: <http://hdl.handle.net/2117/93250>
URIhttp://hdl.handle.net/2117/93250
DLB-52289-2001
ISBN8469968858
Other identifiershttp://www.tdx.cat/TDX-1119101-091721
Collections
Share: