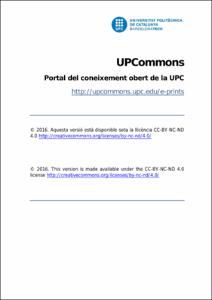 Except where otherwise noted, content on this work is licensed under a Creative Commons license : Attribution-NonCommercial-NoDerivs 3.0 Spain
Abstract
This paper presents a comparison between the vibration energy flow radiated by a double-deck tunnel and the one radiated by a simple tunnel when both are excited by constant or by harmonic moving loads. For both cases, the radiated energy is computed using a three-dimensional semi-analytical model of the system. The total energy radiated upwards is presented for a wide range of load speeds, when a constant moving load is considered, and for a wide range of excitation frequencies, when the excitation is a harmonic moving load. Significant differences have been obtained, first, for constant loads moving at very high speeds and, second, for harmonic loads moving at typical speeds for underground trains.
Description
© 2016. This version is made available under the CC-BY-NC-ND 4.0 license http://creativecommons.org/licenses/by-nc-nd/4.0/
CitationClot, A., Romeu, J., Arcos, R. An energy flow study of a double-deck tunnel under quasi-static and harmonic excitations. "Soil dynamics and earthquake engineering (1984)", Octubre 2016, vol. 89, p. 1-4.
URIhttp://hdl.handle.net/2117/93133
DOI10.1016/j.soildyn.2016.07.008
ISSN0267-7261
Publisher versionhttp://www.sciencedirect.com/science/article/pii/S0267726116300859
Collections
Share: