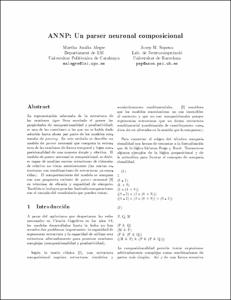 Show full item record
Sopena, JM
Alegre, Martha Analia Marha Analia
Document typeExternal research report
Rights accessOpen Access
Abstract
An appropriate representation of sentence structure (having the properties of compositionality and productivity) is one of the points to which, until now, an ad equate solution had not been found by means of neural models of parsing. In this article, a neural parser is described that computes sentence structure and achieves compositionality in a simple and effective way. The model is compositional in the sense that it is able to analyze new structures-never having been seen be fore -which are recursive combinations of known structures. The model's performance is compared to a recently proposed neural parser (Mikkulainen) in terms of efficiency and computational capacity. We also carried out experiments using smaller training sets and we considerably increased the sized of the vocabulary used by Mikkulainen.
CitationAlegre, M., Sopena, J. "ANNP: a compositional neuronal parser". 1999.
Is part ofLSI-99-51-R
URIhttp://hdl.handle.net/2117/93108
Collections
Share: