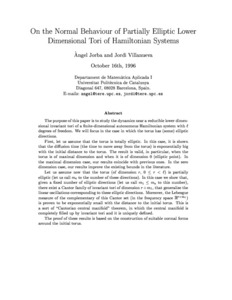 The purpose of this paper is to study the dynamics near a reducible lower dimensional invariant tori of a finite-dimensional autonomous Hamiltonian system with $\ell$ degrees of freedom. We will focus in the case in which the torus has (some) elliptic directions. First, let us assume that the torus is totally elliptic. In this case, it is shown that the diffusion time (the time to move away from the torus) is exponentially big with the initial distance to the torus. The result is valid, in particular, when the torus is of maximal dimension and when it is of dimension 0 (elliptic point). In the maximal dimension case, our results coincide with previous ones. In the zero dimension case, our results improve the existing bounds in the literature. Let us assume now that the torus (of dimension $r$, $0\le r<\ell$) is partially elliptic (let us call $m_e$ to the number of these directions). In this case we show that, given a fixed number of elliptic directions (let us call $m_1\le m_e$ to this number), there exist a Cantor family of invariant tori of dimension $r+m_1$, that generalize the linear oscillations corresponding to these elliptic directions. Moreover, the Lebesgue measure of the complementary of this Cantor set (in the frequency space $\RR^{r+m_1}$) is proven to be exponentially small with the distance to the initial torus. This is a sort of ``Cantorian central manifold'' theorem, in which the central manifold is completely filled up by invariant tori and it is uniquely defined. The proof of these results is based on the construction of suitable normal forms around the initial torus.
URIhttp://hdl.handle.net/2117/931