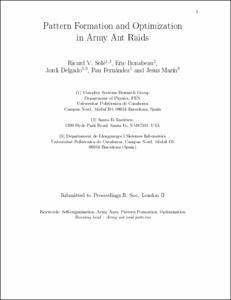 Marín Sánchez, Jesús
Document typeExternal research report
Rights accessOpen Access
Abstract
Army ant colonies display complex foraging raid patterns involving thousands of individuals communicating through chemical trails. In this paper we explore, by means of a simple search algorithm, the properties of these trails in order to test the hypothesis that their structure reflects an optimized mechanism for exploring and exploiting food resources. The raid patterns of three army ant species, {em Eciton hamatum}, {em Eciton burchelli} and {em Eciton rapax}, are analysed. The respective diets of these species involve large but rare, small but common, and a combination of large but rare and small but common, food sources. Using a model proposed by Deneubourg and collaborators, we simulate the formation of raid patterns in response to different food distributions. Our results indicate that the empirically observed raid patterns maximise return on investment, that is, the amount of food brought back to the nest per unit of energy expended, for each of the diets. Moreover, the values of the parameters that characterise the three optimal pattern-generating mechanisms are strikingly similar. Therefore the same behavioural rules at the individual level can produce optimal colony-level patterns. The evolutionary implications of these findings are discussed.
CitationSolé, R. V., Bonabeau, E., Fernández, P., Delgado, J., Marín, J. "Pattern formation and optimization in army ant raids". 1999.
Is part ofLSI-99-40-R
URIhttp://hdl.handle.net/2117/93090
Collections
Share: